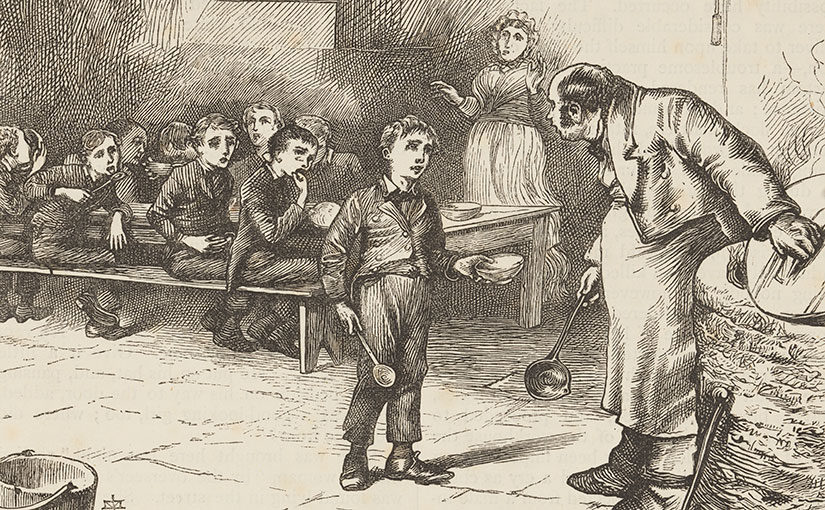 The Household Edition of Charles Dickens was a new, quarto-sized version of the novelist’s works published by Chapman and Hall starting in 1871, after the author’s death, answering “calls for a truly popular and affordable edition of Dickens that were being voiced even before Dickens’s death” (Louttit 2014, 323). Like the novels in their original run, the Household Editions were printed both serially (either weekly or monthly) and as whole volumes. The whole-volume printings were themselves subject to “two methods of volume release: the distinctive green cloth and gilt boards (which adorn many of the volumes in circulation today) at 4s., and a cheaper ‘stiff paper wrapper’ priced at 3s” (2014, 326).

The history of the Hesburgh Library’s recently-acquired volume is not clear, but if it was originally purchased in whole volume form, it is a curious one — it does not bear “distinctive green cloth and gilt boards,” and for good reason. It is a Sammelband, seamlessly binding the Household Dickens Great Expectations together with Oliver Twist. The other method of whole volume distribution, via “stiff paper wrapper,” means the book would have come with no cover, making it cheaper to purchase but also enabling the book owner to order custom book binding. In either case, whether obtained serially in parts or as whole volumes, the book was bound by custom order, as can be further confirmed by the stamp on the back cover, “Bound by W. Drewett, Printer, Binder, Stationer.” Why a person might join together two Dickens novels with no apparent contiguity (Oliver Twist was the first book in the Household Editions, Great Expectations in the middle, and the novels were originally published decades apart) would be a worthy subject of exploration.

In more general terms, collecting witnesses of the Household Edition can help scholars make comparative analysis against the volumes printed during the author’s lifetime (such as the handsome, two-volume first edition of Our Mutual Friend which the library purchased in 2016). Indeed, the Household Edition is receiving renewed attention, particularly for its visual content. By the late twentieth century, it had become commonplace to read Dickens as inextricable from his original illustrators – George Cruikshank, Hablot Knight Browne, and Phiz – which is logical enough. Many period readers would have closely tied the novels to the caricature-like images of these artists.

But approbation was not universal. As Chris Louttit shows, many who wrote on Dickens in the late nineteenth century “preferred instead the more realistic and less emblematic productions of the generation of artists including Fred Barnard, Charles Green and James Mahoney” who adorned the Household Edition (Mahoney was illustrator of the Household Oliver Twist) (2019, 150). Indeed, one Victorian critic, Edwin Pugh, claimed the original illustrations “are as unlike the creations of the Master’s brain as a painted, stuffed wax effigy is unlike the warm, breathing body of a beautiful woman or man” (ibid). Much could be made about the reading of the text based on the visual commentary available to readers at a given period.

The Household Edition of Oliver Twist (and Great Expectations) joins over a hundred other Dickensian special collections holdings of various kinds in the Hesburgh Library, including a Cruikshank-illustrated first edition of Oliver Twist, with a fireside plate “canceled in later issues.”