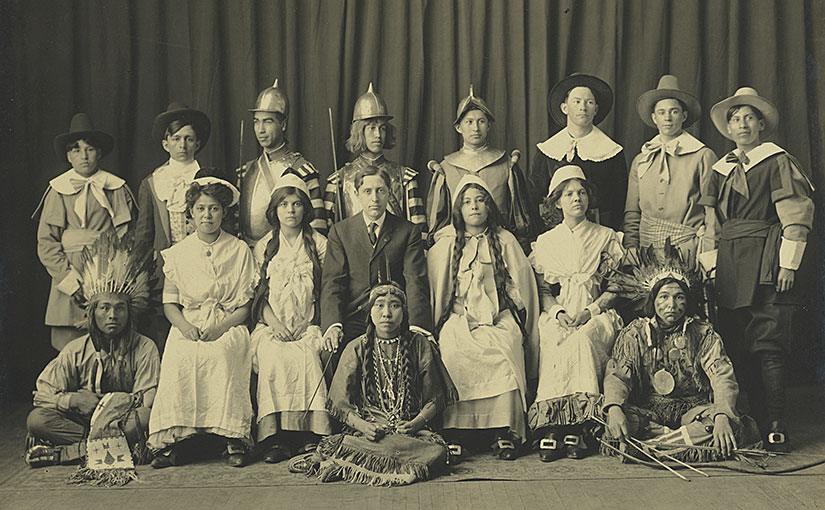 Last week’s blog post described an important collection about the Carlisle Indian School, a boarding school that was part of a federal educational program that opened many similar institutions and lasted through the twentieth century. Thanksgiving often evokes a benign story of starving New England Pilgrims saved by generous Native Americans. Records from the Carlisle Indian School, however, highlight a dark colonialist story of Pilgrims and Indians that the school asked its students to portray on stage. By 1909 Carlisle students had begun performing a theatrical version Henry Wadsworth Longfellow’s poem, “The Courtship of Miles Standish,” as part of the school’s week-long commencement celebrations. The school staged the play for large public audiences at the school and in nearby Harrisburg, Pennsylvania.[1] Adapted as The Captain of Plymouth, it was a comic opera by Seymour S. Tibbals and Henry C. Eldridge, published in 1904.[2]

While the soldier Miles Standish and the Pilgrim John Alden are both interested in a young Pilgrim, Priscilla, Standish is captured by a band of Pequot Indians. The Pequot princess, Katonko, frees Standish on his promise to marry her. Standish quickly reneges on Katonko and takes bloody revenge on the Pequots. The story ends when the Pilgrim leader, Elder Brewster, discovers Standish’s breach of promise to Katonko and insists that Standish marry her, which allows Priscilla and Alden to wed.

The play is both silly (anachronistically, Standish refers to the Standard Oil Company, Rockefeller, and the anti-alcohol icon Carrie Nation) and deeply and openly racist. Katonko and Indians in general are characterized as “the very beginning, as it were, of the race problem” and the play advocates for racial segregation, a position seemingly at odds with the educational and social goals of Indian boarding schools like Carlisle, which worked to assimilate Native Americans into white America.[3]

The play capitalized on popular demand during the first decades of the twentieth century for entertainment featuring Indians. Presumably Tibbals and Eldridge intended whites to be cast in both the European American and Indian parts. Carlisle students, however, were required to play both roles: the young people cast as settlers had to act white, while those cast as Native Americans had to play white-constructed versions of savage Indians.[4] Carlisle’s founder, Richard Henry Pratt, understood the promotional powers of photography and he used manipulated images to argue for the success of his program to “civilize” Indians. Using before-and-after photographs, Pratt contrasted the traditional clothing and hair styles of newly arrived children with the cropped hair, neat uniforms, and photographically lightened skin of new students.[5] When The Captain of Plymouth was staged, school officials continued to use Pratt’s methods to promote the school. As seen here, the carefully organized studio photographs of cast members enhanced the whiteness of Pilgrim cast members in contrast to their fellow actors who played Indians. The Alfred W. Ramsey papers document a dark part of United States history and uncover what must have been bewildering experiences for young Native boarding students, far from their homes and families.

[3] Quotation from Tibbals and Eldridge, The Captain of Plymouth, 21. White, “White Power and the Performance of Assimilation,” 114-15.