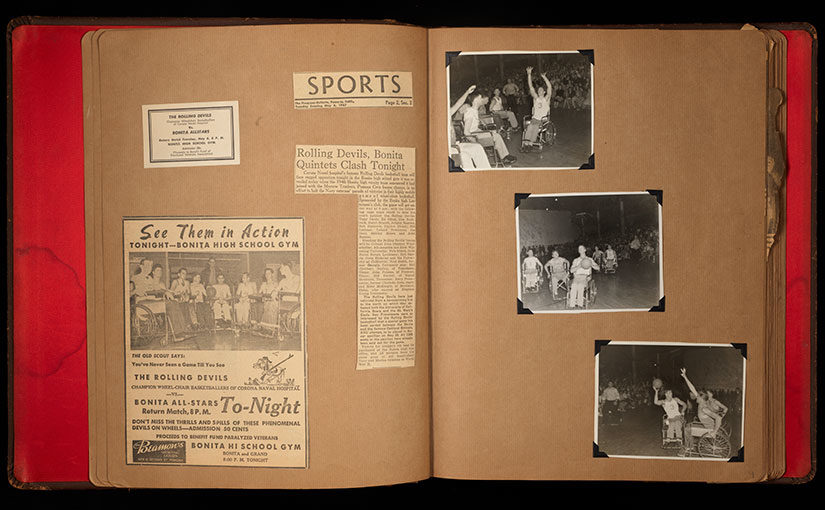 “Tonight will bring … one of the most unique athletic contests ever witnessed” wrote the Riverside Enterprise newspaper in March 1947 before a wheelchair basketball game between the local Riverside College basketball team and the Rolling Devils from the Corona Naval Hospital in Corona, California, on the outskirts of Los Angeles.

This is one of many clippings from a significant new acquisition by the Joyce Sports Research Collection—a scrapbook documenting the short career of the Corona Rolling Devils, one of the first successful and popular wheelchair basketball teams in the country. The 12×15 inch scrapbook features about 20 double-sided leafs and contains newspaper clippings, ephemera, and about 30 original photographs documenting the career of the Rolling Devils during the spring and summer of 1947.

As recounted in the recent book Wheels of Courage by David Davis, wheelchair basketball was originally devised in 1946 by Bob Rynearson, the Assistant Athletic Director at the Birmingham Veterans Administration (VA) Hospital in Van Nuys, California, to provide recreation and rehabilitation for World War Two veterans who were paralyzed. Due to medical advances during the 1940s, it became increasingly common for soldiers to survive spinal cord injuries, and, in the aftermath of the war, the VA rushed to provide care for an unprecedented number of veterans with paralysis. Rynearson’s adaptation of rules for wheelchair basketball was an immediate hit among veterans at the hospital.

In early 1947, Dr. Gerald Gray, a reconstructive surgeon at the Corona Naval Hospital, visited colleagues at the nearby Birmingham VA hospital and happened to see patients there playing the new wheelchair basketball game. After conferring with Rynearson, Dr. Gray immediately introduced wheelchair basketball at the Corona Naval Hospital and organized a team, who dubbed themselves the “Rolling Devils.”

In February 1947, the wheelchair basketball team from the Birmingham VA traveled to Corona to play the Rolling Devils. The visiting team was victorious in one of the first recorded wheelchair basketball games in American history. The Rolling Devils quickly recovered from this loss, however, and went undefeated for the rest of 1947, garnering significant public attention in the process.

The newly acquired scrapbook documents the Rolling Devils impressive winning streak. Most of their opponents were teams composed of non-disabled players who had to quickly adapt to playing basketball while in a wheelchair. The Rolling Devils’ victories over teams like Riverside College, the La Verne American Legion, the Pomona Veterans, and the Bonita All Stars are documented in newspapers stories, programs, advertisements, and photographs. The Devils also convincingly won a return match with the Birmingham VA hospital 41-10.

As recounted in the scrapbook, in the spring of 1947, the Rolling Devils made two trips to  Northern California. The Devils beat the varsity basketball teams from St. Mary’s College and the University of California. In a game in May sponsored by the Oakland Tribune, the Devils also defeated the semi-pro Oakland Bittners, a top AAU team led by former Stanford star and future Minneapolis Laker Jim Pollard. The Devils even invited California governor Earl Warren to their sold-out game against the Oakland Bittners, but he telegraphed his regrets.

Throughout their winning streak, the Rolling Devils received praise for their skill. After beating St. Mary’s, a local reporter enthused, “The veterans, who learned to use the chairs through necessity, scooted around the floor like a bunch of spiders, while the college boys gave the spectators a three-ring circus by running into everything in sight and alternating between falling on their noses and backs.”

Some accounts of the Rolling Devils exploits, though, were tinged with a patronizing sentiment towards the wheelchair athletes. Before the game against the Bittners, for example, Alan Ward, a sports columnist for the Oakland Tribune, melodramatically recounted “the moral courage which prompts 10 young men to perform a collective feat which verges on the impossible.”

In mid-June, the Rolling Devils visited Sacramento for what would prove to be their final hurrah.  They beat a local college all-star team in a fundraising game to record, reportedly, their 22nd consecutive victory. After the game, the Devils visited the California legislature and finally met Governor Earl Warren who presented the players with honorary scrolls. Upon returning home, however, the Rolling Devils abruptly disbanded. As the United States military began discharging or transferring patients out of the Corona Naval Hospital, players on the team went their separate ways.

Despite the team’s relatively short existence, the Rolling Devils had been instrumental in popularizing the sport of wheelchair basketball and educating the public about expanded athletic opportunities for people with disabilities. Author David Davis explains in Wheels of Courage that, “Thanks to the publicity generated by events like the Rolling Devils’ groundbreaking road trips, the spread of adaptive sports beyond the VA hospitals was on the horizon.”

The Rolling Devils scrapbook is available to the public in the Joyce Sports Research Collection.