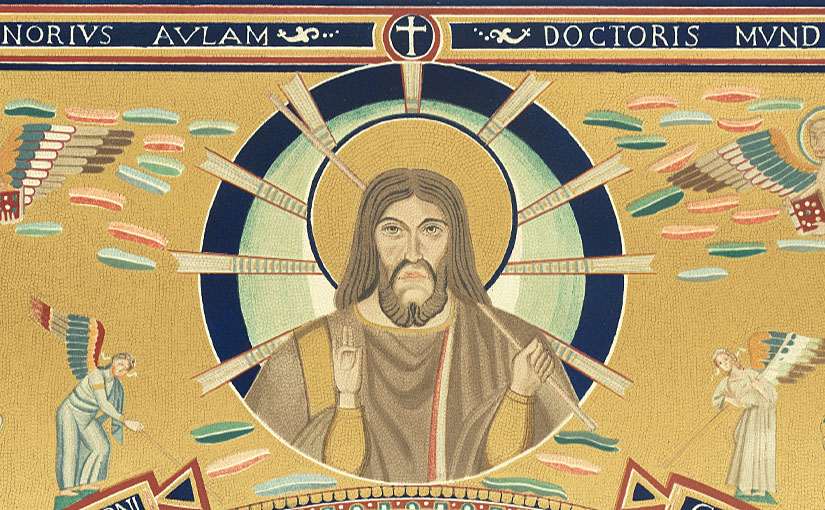 Giovanni Battista de Rossi (1822-1894) was a distinguished scholar of early Christian archaeology. Born in Rome, he attended the Collegio Romano and La Sapienza, earning a doctorate. After finishing his studies he was appointed scriptor at the Vatican Library, where he cataloged manuscripts. In addition to his expertise in archaeology, de Rossi was skilled in epigraphy and was an authority on the topography of ancient and medieval Rome. His studies of the apse mosaics in Roman churches continue those of the seventeenth-century scholars Jean l’Heureux and Giovanni Giustino Ciampi. He travelled widely, and was acquainted with the foremost European scholars of his day.

De Rossi was a member of the Royal Netherlands Academy of Arts and Sciences and the American Antiquarian Society. A devout Catholic, he heard Mass every day. As his health failed, Leo XIII gave him use of an apartment at Castel Gandolfo, where de Rossi died in 1894.

De Rossi published a number of works in the second half of the nineteenth century, among which is this recent acquisition by the Hesburgh Libraries. The Musaici cristiani e saggi dei pavimenti delle chiese di Roma anteriori al secolo XV [“Christian Mosaics and Specimens of the Floors of the Churches of Rome Prior to the 16th Century”] originally was published in 27 fascicles between 1872 and 1896. The Libraries’ set is bound into two folio volumes, the first being the text and the second featuring 53 plates of illustrations. William Jackson of Aberdeen, Scotland was responsible for its binding. This set was presented to a monastery library by Lady Cecil Kerr (1883-1941), a Catholic author who wrote historical and devotional works.

The illustrations in the second volume are fine examples of chromolithography, which was a technique developed in the nineteenth century for the mass production of color images. The process of chromolithography used multiple blocks or stones, each of a different color, which were printed successively to develop each image. The Libraries’ copy includes some highlights in gold.