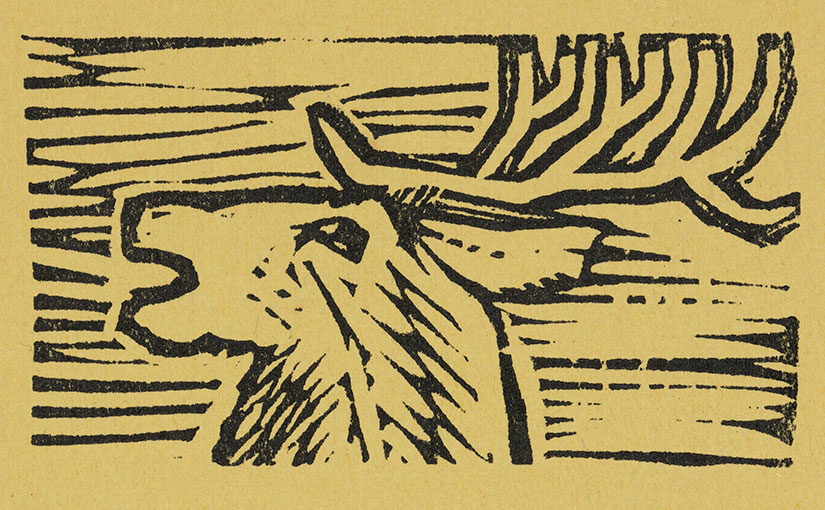 For St. Patrick’s Day, we feature The Breastplate of Saint Patrick, translated by Thomas Kinsella.

Thomas Kinsella, recently deceased, was one of Ireland’s most highly-regarded poets of recent times. In addition to his poetry, he translated many literary texts from Old Irish and Modern Irish to English. Prominent among these are his translation of the epic Táin Bó Cuailgne, and also his translated poems in An Duanaire: Poems of the Dispossessed. Liam Miller’s The Dolmen Press published many of Kinsella’s works, usually with the close collaboration of poet, printer and artist.

A note in this Dolmen Press edition states that this text is from the manuscript in the Library of Trinity College, Dublin. This is one of two Liber Hymnorum manuscripts. The other is part of the Franciscan Manuscripts collection at UCD Archives, also in Dublin. Both manuscripts have been digitized and images of the text may be viewed and studied online.

According to the introduction, Patrick composed the hymn to shield him and his monks from ‘deadly enemies who were ambushing the clerics.’

The manuscript introduction announces that the hymn is called ‘fáeth fiadha’. This is usually translated as the ‘deer’s cry’ and is the title given to a later Dolmen Press edition, also by Thomas Kinsella.

Our other Dolmen Press edition, published in 1961, is also a translation by Thomas Kinsella. There are textual variations, as can be seen from a comparison of the initial lines. ‘I arise today’ and ‘Today I put on’. The Old Irish caused more difficulty for earlier translators. George Petrie, who translated the text in the nineteenth century, decided the word ‘atomriug’ must have been two words, and that ‘tomriug’ was a form of ‘Tara’. Subsequent research in Old Irish language sources show that ‘atomruig’ may be translated as ‘I arise’.

We end with an image of the best-known part of the text. The prayer beginning with ‘Christ by me, Christ before me’ is sung in many variant arrangements. this is from the 1954 edition.