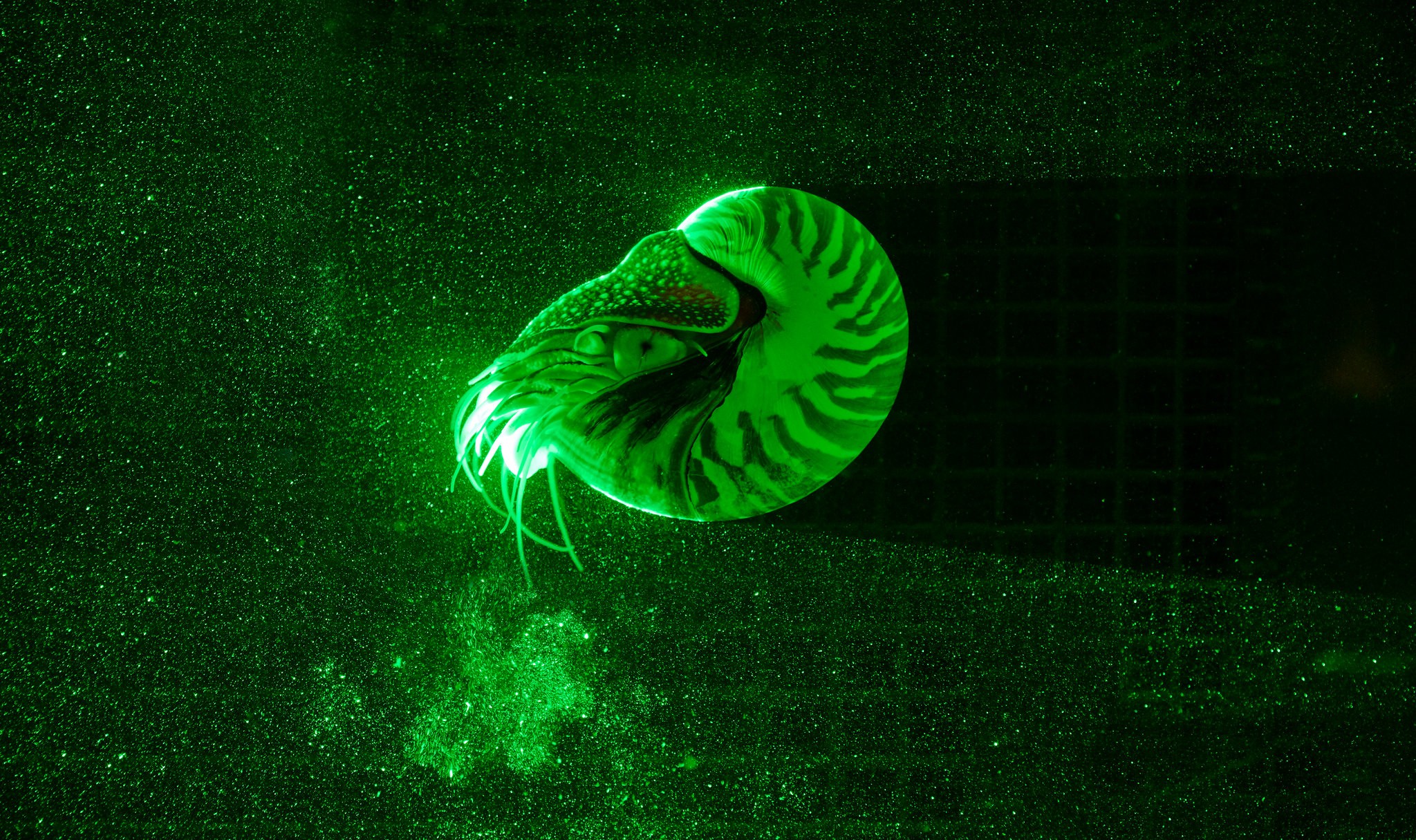 In the aptly titled poem The Chambered Nautilus, Oliver Wendell Holmes Sr. praises the eponymous cephalopod for its elegant shape and vibrant colors. The ship of pearl, as Wendell calls it, might not be the swiftest vessel; but Thomas R. Neil and Graham N. Askew’s research indicates that the chambered nautilus might be among the most energy efficient ships in the seven seas.

The Nautilus pompilius is constantly moving to depths up to 700 m. At such depths, oxygen concentration decreases significantly: only 30% of that available at the surface. In such harsh environments, the nautilus must find a way to use its oxygen reservoir most efficiently while still being able to carry out metabolic functions. As such, the nautilus has adapted to use jet propulsion in a most efficient manner.

Jet propulsion in the nautilus is achieved by the simultaneous contraction of the head retractor and funnel muscles (shown in diagram above). The compression of the mantle cavity causes a pressure difference with its surroundings, resulting in a jet of water being expelled from the mantle cavity via the funnel. The nautilus uses its flexible funnel to control its swimming direction as shown in the video. Slower swimming is powered by rhythmic contractions of the funnel flaps that generates a wave that travels along the funnel wings. This produces a unidirectional flow across the gills. Although jet propulsion is less efficient than undulatory swimming (think of the swimming motion of a ray), the Nautilus converts chemical energy into hydrodynamic work for motion more efficiently than fellow cephalopods such as the squid and even salmons (at lower speeds).

In their study, Neil and Askew used particle image velocimetry (PIV) to study the wake of the nautilus’s jet. PIV consists of spreading particles of aluminum oxide in a water tank and shinning a laser on them. As the nautilus moves, the particles in the tank move with the jet. A high-speed camera is used to take multiple pictures of the floating particles and the relative position of these between snapshots is used to determine a velocity profile of the nautilus’s water jet.

The results from the study show that the whole cycle propulsive efficiency and thrust generation are related to the swimming orientation of the nautilus. The propulsive efficiency ranged between 30% and 75% for posterior-first swimming and 48% to 76% for anterior-first swimming (orientations defined in diagram above). Moreover, efficiency increases with greater speed in posterior-first orientation but decreases in anterior-first. This might have to do with energy losses associated with the re-orienting of the funnel that turns back on itself to move in the anterior orientation. Moreover, at low speeds, the nautilus spends more time jetting water than refilling, resulting in a lower jet speed but overall more efficient propulsion.

Although not covered in their research, Neil and Askew’s findings about jetting duty cycles and efficient propulsion at low speeds could be potentially applied to the design of more efficient hydrojets to be used in underwater vehicles. Engineering seeks to imitate nature’s most intelligent designs; and as Wendell puts it in his work, the nautilus proves to be a truly awe-inspiring creature worthy of imitation.