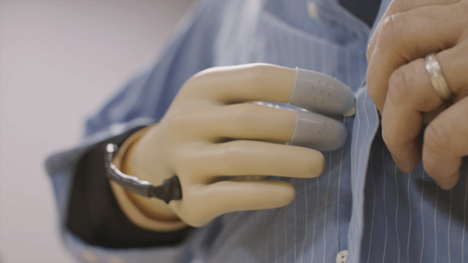 Whether or not you know someone who has lost a limb, we can all easily imagine the hardships that would follow such a tragedy. Thanks to scientific advancements, prosthetic limbs have become more and more available and functional over the past few decades. However, one of the greatest challenges—which has only recently been started to be addressed—still facing the industry is the question of how to restore tactility through prosthetic hands. Having the sense of touch in your hands is essential to everyday activities, such as putting on your clothes in the morning or drinking a glass of water; and, unfortunately, in the US alone there are over 100,000 persons registered who had an amputation of a complete arm, hand, or partial hand.

When it comes to tactility, there are three main pieces of information that need to be transferred to your somatosensory cortex, the part of your brain that receives and processes sensory information. Those three pieces of information are contact location, pressure, and timing (i.e., when the contact begins and ends). Most studies that have looked into transferring this information to a brain from a prosthesis have done so through a brain-machine interface using intracortical microsimulation (ICMS), which activates neurons though implanted microelectrodes within the somatosensory cortex. The brain-machine interface would work in the following way: First, the prosthesis would gather force data from mechanical stimuli to the prosthesis. Next, the prosthesis would send the data to a microelectrode array capable of ICMS via a computer processing unit. Finally, the microelectrode array would deliver electrical pulses to activate neurons within the somatosensory cortex, causing you to “feel” the mechanical stimuli.

The contact location and pressure of the mechanical stimuli would be determined from the force data gathered by the prosthesis; and the contact timing would be determined by having the force data be sent as a constant feed-back loop to the somatosensory cortex—that way a change of force from zero to some arbitrary, non-zero value and from some arbitrary, non-zero value to zero would indicate the beginning and end of the contact timing, respectively.

In studies by Tabot et al., O’Doherty et al., and Berg et al.;  ICMS feedback has been shown to work with various species monkeys. Tabot’s and Bergs’s studies in particular are very promising, as both studies showed that the monkeys would respond in the same way when a mechanical stimulus was applied to either a prosthetic hand/finger or a native, biological hand/finger. Based on these works and others, there are now a few working prototypes of prosthetics arms and hands that can “feel” that have been given to the general population, such as the one that Marine veteran Claudia Mitchell has. Further work in this field of study will hopefully bring us to the point where all amputees are able to have a prosthetic limb that allows them to live out their daily lives just as easily as the rest of us. Additional readings on bioinspired prosthetic interfaces and prosthetic tactile feedback can be found here and here.