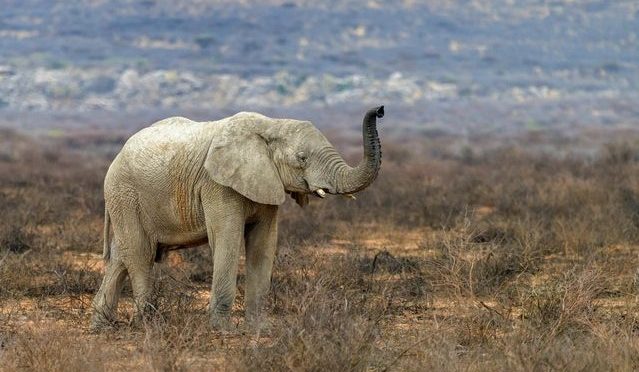 African Elephants have the largest volume to surface-area ratio of any living land mammal; it’s not a surprise then that they have to dissipate a tremendous amount of heat. You and me eat 2,500 calories a day – an adult male elephant might consume over 70,000 calories each day! This means these gigantic beasts need to remove several kilowatts of heat. So how do they do it? And can we learn anything from these biological marvels?

In order to combat the heat, elephants have developed several unique features. First is the large, flapping ears. Phillips and Heath have studied the heat exchange by the ears extensively, finding remarkable advantages. It may not look like it, but those ears make up 20% of an elephants surface area – this essentially transforms them into large heat sinks. But that’s not the end of their ears’ advantages. Elephants are able to regulate heat transfer through vasomotion; this is an oscillation of blood vessels that is unrelated to heart beat. Thus, elephants are able to store heat in their ears by expanding the blood vessels, then releasing this heat during the nighttime when it is more efficient. Modeling has shown that nearly 100% of heat loss requirements can be met through the movement of the ear.

Elephant ears aren’t the only heat-reducing mechanism. Myhrvold et al. propose that a low density of hair could also be a method to remove heat. As humans we often think of hair as a mechanism to keep us warm – this is true as it will serve as insulation against our skin. Low density hair, however, provides a larger surface area (they act as small little heat fins) that offsets any increased insulation they may cause. Researchers found the break-even point to be 0.3 million hairs/m2 – elephants only have 1500 hairs/m2.

Us humans are homeotherms – this means our internal body temperature is kept stable regardless of outside temperatures. Most other mammals follow homeothermic tendencies, but there is recent evidence that elephants are actually heterotherms – their bodies are both self-regulating and adaptive to the environment. In fact, elephant body regulation is very similar to desert mammals like camels. During the day elephants will increase their body temperatures, and during the night they will lower them (this also helps for when the night is very cold and the animal wishes to conserve instead of dissipate heat). Weissenböck et al. discovered that elephants can have a body temperature range from 35.0°C – 37.5°C (95°F – 99.5°F), a range that is about twice as large compared to humans.

What We Can Learn

African Elephants present a unique natural problem: how do you cool something so large that produces so much heat? This problem is also present in our own human world from cooling down skyscrapers to making sure your computer CPU doesn’t overheat. One of the more promising developments is thermal energy storage and how it can heat, cool, and provide electricity for the modern world. Elephants’ physiological adaptations can serve as the blueprints for future innovation in heat transfer and dissipation.