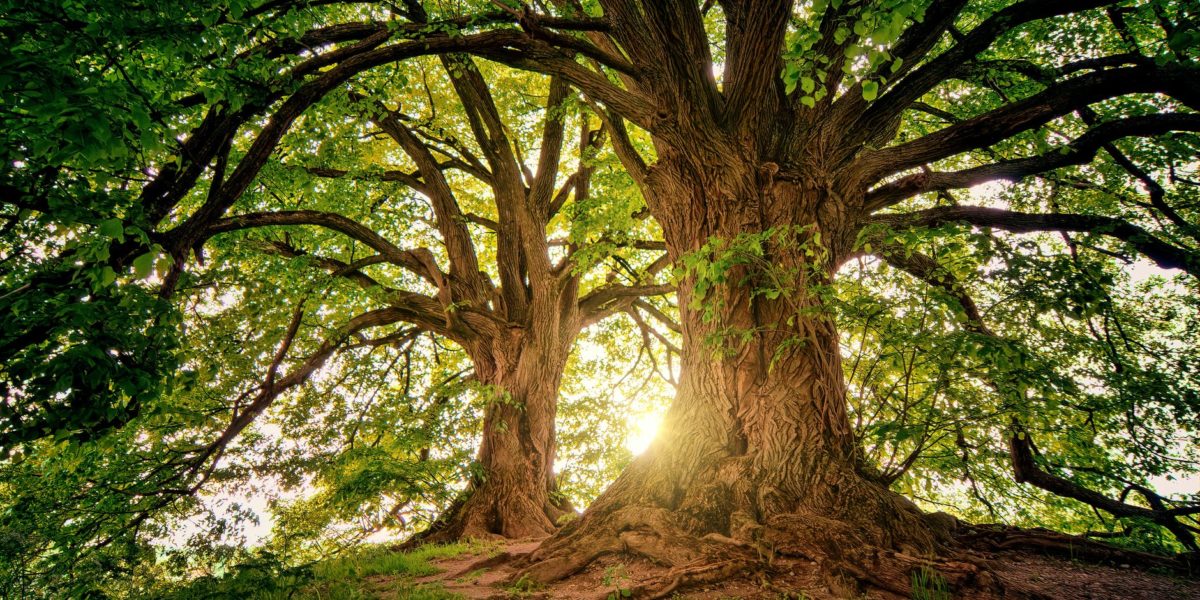 Plants come in all shapes and sizes, from the smallest blades of grass to trees so big that the tops can’t even be seen from the ground. But all plants are made from the same basic cell structures and components. So why is it that I can easily pick a flower, but could spend hours chopping at a tree and hardly make a dent? Trees are so much stronger than almost every other plant that they have become a staple in the construction industry. The key to the success of the tree is small differences in the structure.

Cell walls are made up of cellulose, pectin, and lignin. Cellulose, with a Young’s Modulus of 120-140 GPa, provides the most structure to the cell wall, and the cell walls of trees have high concentrations of cellulose, averaging 45%. The other components in-between the cellulose, also can greatly impact the stiffness of the cell wall. Along with the cellulose, the secondary wall of tree cells contain more lignin that pectin as a binding agent. Lignin is found in all plant cells, but the high concentrations found in tree cells are what set it apart from other plants. Lignin has a Young’s Modulus of 3 GPa, while pectin is a gelatinous component that provides little structure. A study conducted by Donaldson also showed the presence of lignin has increased the size of the microfibrils and cellulose matrix to make the cell wall less porous, further increasing stiffness. The high concentration of lignin in the cell wall is a defining characteristic of tree cells and greatly increases their stiffness and rigidity.

The arrangement of the lignin and cellulose in the cell wall also increases stiffness. As tree cells divide, different layers of the cell are formed. This process is described by Plomion et al. in their article on wood formation.

The first layer is the middle lamella, which is made up mostly of pectin, but lignin is added throughout the differentiation period to eventually increase stiffness. This layer is mostly used to adhere the cell together. The next layer is the primary wall, which can consist up to 70% lignin. The primary wall is very elastic, to allow the cell to continue to grow. In other plants, this layer can have a higher concentration of pectin. The lignin in this layer means the tree cell is less malleable, but also increases stiffness and strength. The final layer is the secondary wall, which is separated into three layers, S1, S2, and S3. Most plants only have only one secondary wall, so having three distinct layers increases the strength and stiffness of the tree. Each layer consists of cellulose microfibrils, which are arranged in parallel, but in a different orientation for each layer. As the cell grows, the secondary layer is packed with more lignin, increasing the stiffness of cell wall. The S2 layer is the thickest, and contains about 45% cellulose and 20% lignin. Again, the higher lignin content, instead of pectin, allows for more rigidity, strength, and stiffness in the layer that provides the most structure to the cell. All of the cellulose and lignin layers, closely packed together, create a very stiff cell wall unlike any other plant.

It’s the small changes to the structure of the cell wall, such as adding lignin and layers into the secondary wall, that make the difference in the structure between a flower cell and that of a tree.