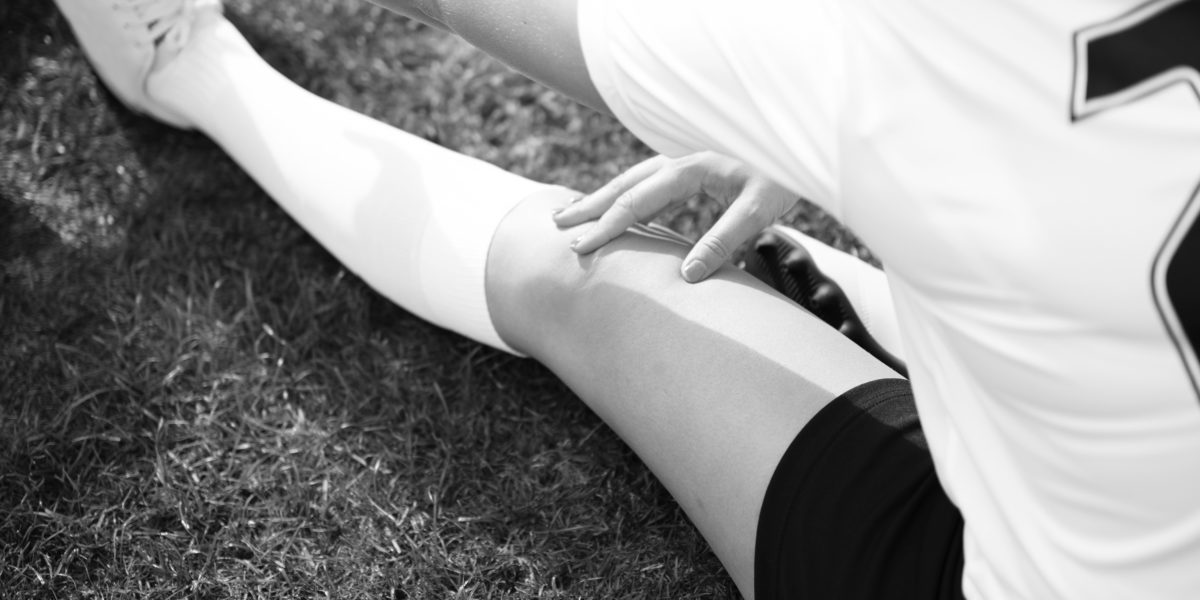 Female athletes face a greater rate of anterior cruciate ligament (ACL) rupture than males. According to Dr. Karen Sutton and Dr. James Bullock from the Department of Orthopaedics and Rehabilitation at Yale University, female athletes are 2 to 8 times more likely to tear their ACL than male athletes. The majority of these injuries (more than two-thirds) are from non-contact situations. A variety of anatomical, biomechanical, and hormonal factors attempt to explain this difference.

Some anatomical factors that help stabilize the knee joint and may be linked to ACL injuries include: the quadriceps angle (Q angle), tibial slope, and intercondylar notch. The Q angle is the angle formed between the upper leg at the hip joint and the lower leg at the knee joint. This angle tends to be 3.4-4.9 degrees greater in females than males when measured in a standing position. The figure at right shows the Q angle difference between men and women that is caused by anatomical differences including a wider pelvis in females. A greater Q angle causes more strain on the quadriceps muscle away from the centerline of the body, which can affect the position of the ACL to be more prone to rupture.

Tibial slope is a quantity used to describe the position of the tibia relative to the femur. When the tibia is positioned more forward than the femur there is a greater posterior tibial slope and therefore increased ACL strain. On average, females have shown to have a greater tibial slope, which may contribute to the higher incidence of ACL injuries. The figure below illustrates the biomechanics of posterior tibial slope: the effect of the knee joint compressive load (down arrow) and the force of the quadriceps (up arrow) result in an anterior shear force, causing anterior translation of the tibia relative to the femur (right-directional arrow) .

In terms of biomechanical differences between men and women, women have greater natural muscle contractions for movement away from the centerline of the body. This translates to a difference in landing positions for women compared to men – females tend to land more straight, creating more force on the knee joint, while males absorb the impact better by naturally flexing their knees upon landing. The hamstring to quadriceps ratio (H:Q ratio) is the functional strength of the hamstring muscles (peak torque) relative to the strength of the quadriceps in motion. Poor muscle strength has been linked to higher risk of lower extremity injury. Males have the ability to increase their H:Q ratio during sport motion, but females fail to do so. Women have also shown greater internal rotation laxity – slackness or lack of tension in a ligament – than men. Generalized laxity was also significantly greater among individuals who suffered a noncontact ACL injury compared to an uninjured control group.

Hormonal factors are an additional consideration that researchers have explored, but the results have been inconclusive in making a direct link between hormone levels and the rate of ACL injury.

Additional reading on this topic can be found at VeryWellHealth and SoccerNation. The following video shows some advice for female ACL injury prevention.