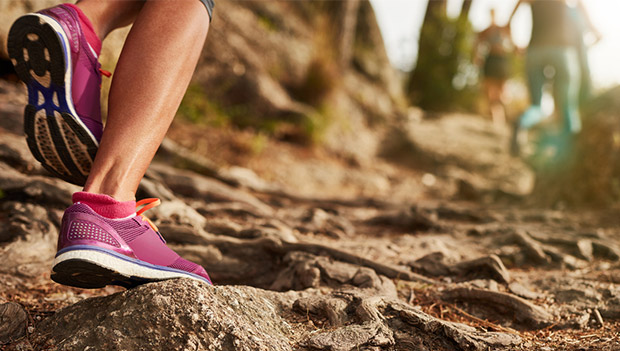 Have you ever been out running on a gorgeous fall day, only to have the run cut short by a painful misstep on a tree root covered by leaves? I have, and let me tell you – it’s awful! And even if you aren’t a runner, according to the Sports Medicine Research Manual, ankle sprains are a common, if not the most common, injury for sports involving lower body movements. Now, the solution to preventing this painful and annoying injury could be as simple as avoiding tree roots and uneven ground, but the real problem behind ankle sprains deals with the anatomy of the ankle.

The next question that has to be asked is why are these ligaments so much weaker than other ones? The answer to this question is based on their physical make up. Ligaments are made of soft tissue that has various collagen fibers running parallel to each other throughout it. The more fibers there are, the more structure and rigidity there is. Think of the fibers as a rope: The rope can stretch to a certain point, but once it hits that point it will snap and break. But if you have a thicker rope (such as the medial ligaments), it becomes much harder to break.

The ligaments on the outer part of the ankle have fewer collagen fibers than those on the inside of the ankle. Thus, when the ankle is moved in an awkward position, it is more likely that the lateral ligaments will break.

Once you sprain your ankle, the focus turns to treatment. Treatment will differ slightly for every individual depending on the severity of the ankle sprain. The simplest way to treat a sprained ankle is to follow the RICE (Rest, Ice, Compression, Elevation) method. Other forms of treatment include taping the ankle or using a brace to restrict movement and to add support and extra stability. Wearing proper footwear is another way that one can prevent and help treat a sprained ankle, as certain shoes are specifically designed to help avoid such injuries. To prevent future ankle sprains, exercises are recommended to help strengthen and stabilize the joint and surrounding ligaments and muscles.

For more information on ankle anatomy and sprains, check out these articles on BOFAS and SPORTS-Health.