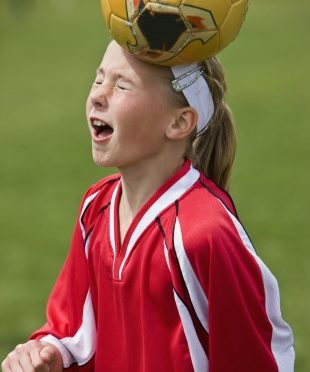 I received my first concussion while playing soccer at 15 when I was knocked out by a ball that was “accidentally” punted directly into the side of the head. It seemed to me like this was one of the few, rare ways to get a concussion from the sport – an unlikely occurrence combined with an unusually aggressive impact. I was proven wrong, however, after I received two more concussions just from heading the ball – a frequently used technique involving seemingly mild impact forces. I have since come to discover that concussions, particularly due to heading the ball, are a huge problem for youth soccer players: currently, in the United States, youth soccer players aren’t allowed to start heading the ball until age 11 in an effort to reduce the risk of concussions. But how do headers cause so many youth concussions, especially when the speed of play is so much lower than for adults?

In most sports, concussions are commonly caused by rapid acceleration/deceleration of the head that causes the exterior of the brain to crash into the interior wall of the skull, which is suddenly accelerating in a different direction. When headers are performed in soccer, this rapid acceleration is caused by impact with the ball, and the risk of concussion depends on both the acceleration of the head and the duration of the impact. The acceleration of the brain can be modeled by Newton’s Second Law (F = ma) for a given impact force F, and the resulting acceleration depends on the effective mass of the players head m, which depends on both the strength and weight of the players head and neck as well as their relative movement compared to the ball (which boils down to technique). This means that a major portion of the risk of concussion relies on the size, strength, and technical ability of the player, all of which have an inverse relationship with player age. So while the relative speed of play and impact forces may seem lower for youth players that can’t run as fast or strike the ball as hard as their adult counterparts, these factors are offset by their relative physical vulnerability.

Issues with injury recognition and response

Another factor contributing to the threat of concussions for youth players is their relatively low ability to recognise and respond appropriately to a brain injury when one occurs. Between 2008 and 2012, researchers observing elite female players aged 11 to 14 for 414 player-seasons (288 athletes were observed for a single season and 63 were observed for two seasons) discovered that 59 concussions occurred, with headers being the most frequent cause at 30.5%. In addition to this injury frequency, it was found that over half of these middle-school-aged athletes continued to play with symptoms after receiving a concussion. This is an additional a logistical problem for youth players, for as age decreases, athletes on average have less access to on-hand, qualified medical personnel and less of an ability to self-diagnose and respond appropriately to injury, putting them at increased risk for long term damage.