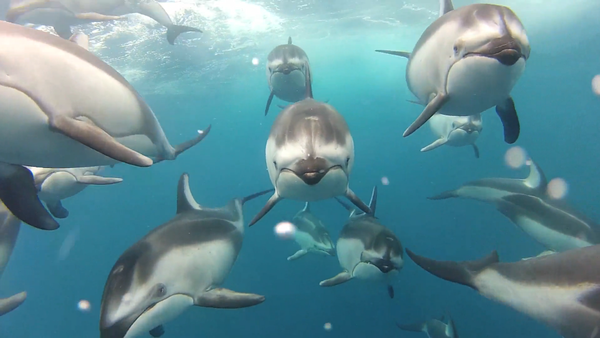 Because of the film Bee Movie, many people at one point were intrigued by the idea that bumblebees should not physically be able to fly due to their large bodies and tiny wings. But, they fly anyway. Technology is advanced enough to study bee wing movement and determine that they produce enough lift to allow them to fly, disproving the previous notion. Similarly, Gray’s Paradox for a long time inferred that dolphins should not be able to swim nearly as fast as they do. But, they still consistently swim at speeds over twenty miles per hour. It was not until recent history that advancements allowed researchers to determine why they are able to reach such high speeds.

All the way back in 1936, Sir James Gray observed the high speeds dolphins could reach in the ocean. He calculated an approximation of the amount of power the dolphins would need to produce to sustain these speeds, based on the drag force on the dolphin as it travels through the water. Gray compared this to the amount of power he expected the dolphin to be able to produce. In order to compute this, Gray used muscle power data from oarsmen. When he compared the muscle mass of these oarsmen compared to dolphins, he determined that the power dolphins could produce was only about one seventh what was needed to travel at the high speeds of which they are capable.

And now we have arrived at Gray’s Paradox. What allows dolphins to move so quickly? To Gray and other researchers for most of a century, this was a mystery. If the assumptions they had made were correct, that would mean dolphins have some way of travelling through water more efficiently than was thought to be possible. This sparked a large amount of speculation into how dolphin skin could reduce the drag force of the water, which was originally believed to be the way Gray’s Paradox would be resolved.

Finally in 2008, Timothy Wei’s research team was able to definitively disprove Gray’s Paradox. He set up an experiment that would allow the force that dolphins exert to be measured. This mainly consisted of having dolphins swim through a curtain of bubbles in a tank. By recording at high resolution the movement of these bubbles as the dolphins swam by, the researchers determined the speed of the water around the dolphin as it traveled. With this information, Wei’s team showed that dolphins are able to produce over 300 pounds of force at one moment, and over longer periods of time 200 pounds of force. This is approximately ten times more force than Gray estimated.

Wei’s findings resolve Gray’s paradox by showing that dolphins have the ability to produce sufficient power from their tail movement to overcome the strong drag force of the water as they move at high speeds. However, this does not explain how dolphins produce so much power with their amount of muscle mass, which is still being examined. One idea is that this is caused by anaerobic muscle fibers that behave in different ways than in humans, and allow more power to be generated than Gray expected.

Timothy Wei plans to continue examining force generation in the swimming of other marine animals. This has the potential to provide more understanding of how marine animals evolved in their swimming aptitude. On the level of microbiology, this research could improve understanding of how dolphin and other animal muscles can perform such high levels of power generation over sustained periods of time.