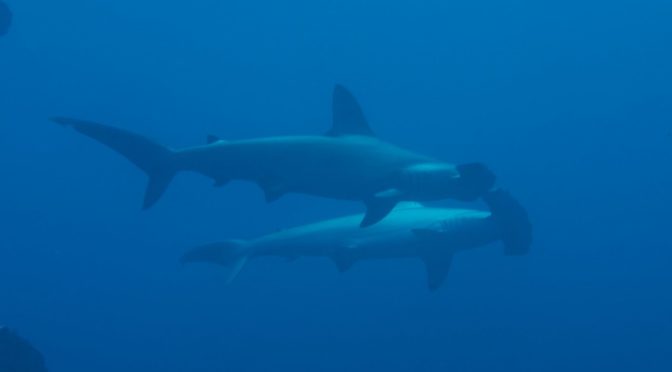 With their sandpaper skin, cartilage skeleton, electroreceptive sensors, and rows of dangerous teeth, sharks fascinate many people. However, even within this distinctive group the hammerhead sharks that make up the Sphyrnidae family have attracted a special attention due to the unusual shapes of their namesake heads, called cephalofoils. Several evolutionary benefits of the cephalofoil have been proposed by researchers. The wide hammer-shaped head may allow the shark to house more sensory receptors in its snout, to bludgeon prey, and to move and maneuver through the water more easily. Here we will address the question posed by the third theory: Does the cephalofoil found on hammerhead sharks provide an advantage in moving and maneuvering underwater?

Many advancements in the aviation and nautical industries have been developed from the study of sea creatures. There is certainly some potential that research into the mobility of sharks could someday be used as inspiration to advance locomotion technologies. In addition, a deeper understanding of the physiology and behavior of hammerhead sharks could help us to better preserve their habitat and species from endangerment – a crisis which some of them are already facing.

The theory that the cephalofoil provides advantages in forward swimming to hammerhead sharks relies on it supplying some hydrodynamic lift similar to the wing of an aircraft. Aircraft wings provide lift partly by creating a pressure difference between the top and bottom wing surfaces. An area of higher pressure on the bottom surface of a wing will generate upward lift. One study by Matthew Gaylord, Eric Blades, and Glenn Parsons applied a derivation of the Navier-Stokes equations – a set of partial differential equations for analyzing fluid flow – to water flow around digitized models of the heads of the eight most common species of hammerhead. It was found that in level, forward swimming there was some pressure differential that developed between the dorsal (top) and ventral (bottom) surfaces of the cephalofoil, but for each species it was very small and often in the direction to produce negative lift. The drag coefficients of the cephalofoil of each hammerhead species were then calculated and shown to increase as the size of the cephalofoil increased. The drag created by a cephalofoil was always much greater than the drags caused by the heads of a control group of non-hammerhead Carcharhinidae sharks.

However, the same study showed that the pressure difference between either surface of the cephalofoil did significantly increase in some species if the shark raised or lowered its head. This extra hydrodynamic force caused by the pressure differential at nonzero angles of attack would help the shark to turn its head up or down very quickly. This more explosive maneuverability was particularly present in the hammerheads that commonly feed on fish and less present in the species that feed predominantly on slower bottom dwellers. Another study by Stephen Kajiura, Jesica Forni, and Adam Summers theorized that the unbalanced, front-heavy cephalofoil may provide extra stability during tight turns by preventing banking. The unbalanced head would create a moment – or torque – to counteract the force from the tail that causes most sharks to roll into their turns. Not banking around turns could be important to some hammerhead sharks that often swim so close to the seafloor that banking into a turn could cause their head or fins to bump into the floor. It is likely that hammerhead sharks evolved the cephalofoil at least in part to provide more explosive and stable maneuvering.