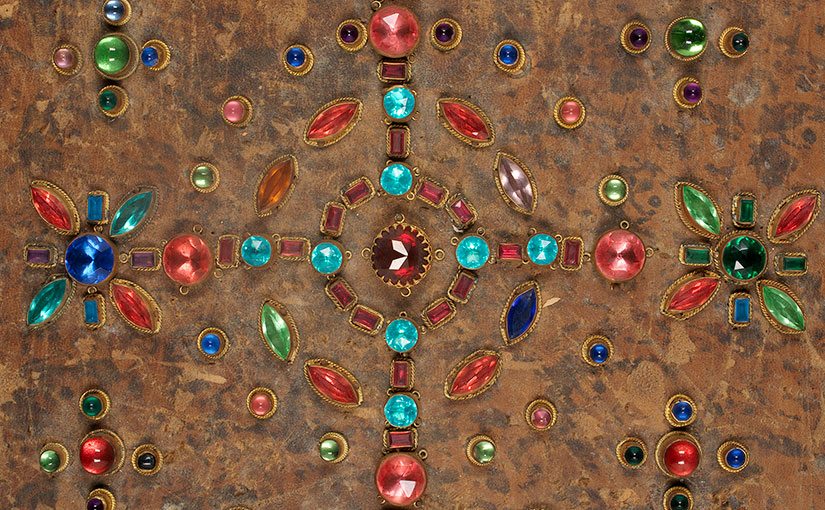 April arrived with budding young minds from Notre Dame’s ECDC and from Chicago’s Pritzker College Prep, eager to examine objects from our holdings.

At the beginning of the month, a group of about twenty-five kindergarteners, parent chaperones, and teachers from the Early Childhood Development Center—more commonly known on campus simply as ECDC—brought lots of smiles and excitement to the department on an otherwise cold, dreary April day. This marked ECDC’s nineteenth annual visit to Hesburgh Libraries. Their first stop was Rare Books and Special Collections where they got to learn about a range of materials. The star of the show was the department’s infamous bling book. This 17th- or 18th-century gradual is almost as big as the kids themselves, and the brightly colored, shiny stones decorating the cover were a big hit. The kids learned about how early books were put together. They felt the thick wooden boards and remnants of the leather covering. goes to landfills and that when they fill up, we won’t have anywhere to put our garbage. This kindergartener’s comment was right on target. Melhorn-Boe’s book—a mini garbage can housing mesh bags filled with a week’s worth of garbage—does make you stop and think about the amount of trash each of us produces.

In addition to the massive book (that no one wanted to have to carry) and the book with the yucky chicken bones in it, the ECDC group learned about the big book’s complete opposite, a miniature that is but 2 centimeters tall, a pop-up book and a tunnel book, ephemera (in this case, the uniform of the Chicago Cubs’ Johnny Evers), and early American commodity money exemplified by a beaver pelt.

After their stop here, the ECDC children headed to the Center for Digital Scholarship, Circulation, and the great view of the greater Michiana area from the fourteenth floor (though the cloud cover acted like a veil on this particular day). Rumor has it that after spending a day in the library, the children created a library in the dramatic play area at ECDC and have been making pop up books and tiny books in their classroom!

Less than a week later, a group of forty freshmen and sophomores visited. They were from Chicago’s Pritzker College Prep, a public charter high school in the Noble Network of Charter Schools. Accompanied by three of their teachers, the group learned about books, manuscripts, and prints that spanned from the fifteenth century to present, covered Europe and the Americas, and included history, science, culture, art, and more. western printing, Hartmann Schedel’s Liber cronicarum, more commonly known in English as the Nuremberg Chronicle. Students had the chance not only to learn why this book was so important and why we call it the Nuremberg Chronicle but also to experience history. Some of them felt the vellum cover and the handmade paper from 1493. When asked if they had ever seen or touched a book from the fifteenth century, they looked down and shook their heads no. The excitement and curiosity on many of their faces after literally touching history, hopefully, will be something that will continue to inspire them as they continue their studies.

Following this, they turned to the first edition of the text that transformed astronomy, Copernicus’ De revolutionibus (On the Revolutions of the Heavenly Spheres), printed in 1543. Then they examined

a facsimile of the Códice Florentino (Florentine Codex). They were particularly excited to see the facsimile of the 16th-century Mesoamerican manuscript (which currently is held by the Laurentian Library in Florence, Italy). Before their visit, the students had studied a section of this ethnographic piece by the Franciscan friar Bernardino de Sahagún. manuscript of trial proceedings from the Spanish Inquisition, the first edition of Mary Shelley’s Frankenstein (currently celebrating its bicentennial), and a Bible illustrated by the Spanish surrealist artist, Salvador Dalì. Two students were particularly intrigued by a portfolio of linocut prints by the Mexican artist Sergio Sánchez Santamaría. They remarked that the images were extremely pretty and were also intrigued when they saw the original linocut used to produce the print sitting next to the print.

Whether just starting school or already in the midst, students can discover a rich and exciting world of materials that too often are not part of their general studies. The texts and images provide valuable content, but being able to engage with the physical objects offers an experience like no other. Being able to feel how well made paper was in the fifteenth century or coming into physical contact with a book that has survived over five hundred years and that has a distinguished lineage or seeing the very piece of linoleum that had been carved to make the finished print excites the mind as the facial expressions and questions and comments of all of these students demonstrated.

ECDC and Pritzker are a couple of examples of groups beyond Notre Dame’s undergraduate and graduate classes that have visited Rare Books and Special Collections. We appreciate instructors taking time to bring their classes and enjoy working with all of these students and instructors. We encourage others groups, whether Pre-K, elementary, middle, or high school and even groups from other organizations to visit Rare Books and Special Collections. If you are interested in visiting, please contact us. We are happy to talk about what your students are studying and what their interests are to identify materials from our collections that would be the most relevant to enhance their learning and stimulate their imaginations.

Rare Books and Special Collections would like to extend its appreciation to all of the people involved in making the visits of ECDC and Pritzker College Prep happen. To the teachers and teacher aides, to the administrators, the parents, and, most importantly, to the students themselves—excited and curious about the old and new, the traditional looking and not so traditional looking, the familiar and the foreign—THANK YOU.