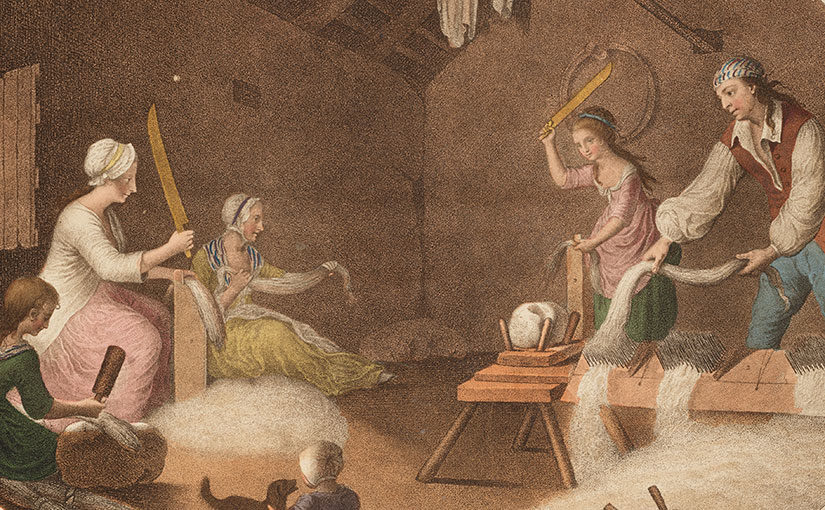 For Labor Day, we decided to feature people involved in the various stages of the linen industry. These illustrations belong to a recently acquired set of prints: William Hincks: The Linen Industry: A set of twelve sepia printed and coloured aquatints. London: Published as the Act directs by R. Pollard, Spafields, June 20, 1791.

Waterford-born artist William Hincks created a set of prints depicting linen production in the north of Ireland. It is assumed that he spent some time in Ulster, but this has not been documented. He published the prints in London in 1783, and the set was republished in 1791 by R. Pollard of Spafields, London.

The linen industry played an important part in Ireland’s economy, accounting for the occupations of a large proportion of the people of Ulster in the eighteenth century. The prints show a whole range of tasks performed in the pre-industrial production of linen, from ploughing and sowing flax seeds in a County Down field, to selling the linen at Dublin’s Linen Hall.

The fourth plate is the first with an indoor setting. Women, girls and a man are engaged in beetling, scutching and hackling. These were all very unfamiliar verbs for me, and I recommend the video of Ulster Folk Museum curator, Valerie Wilson, who describes the process of linen-making from beginning to end. The video is at the end of her blogpost, Warp and Weft: The Story of Linen in Ulster.

This print, the sixth in the series, shows women spinning, reeling, and boiling the yarn or thread.

Following spinning and boiling, the next print shows a weaving shed, with the tasks of winding, warping and weaving. At this time, Ulster had an estimated 40,000 weavers, so one can imagine that the activities depicted were common in villages and towns throughout the province.

The prints will be available for viewing on request once we are able to have a fully open reading room. Also in our collection is a helpful booklet, Illustrations of the Irish linen industry in 1783 by William Hincks, by the Ulster Folk and Transport Museum, which describes and discusses this print collection.

As Irish economic history forms an important part of the Irish collections at the Hesburgh Libraries, we have many books treating various aspects of the linen industry. We are glad indeed to have a set of William Hincks’ prints, with their view of activities and equipment that were once an important part of Irish life.