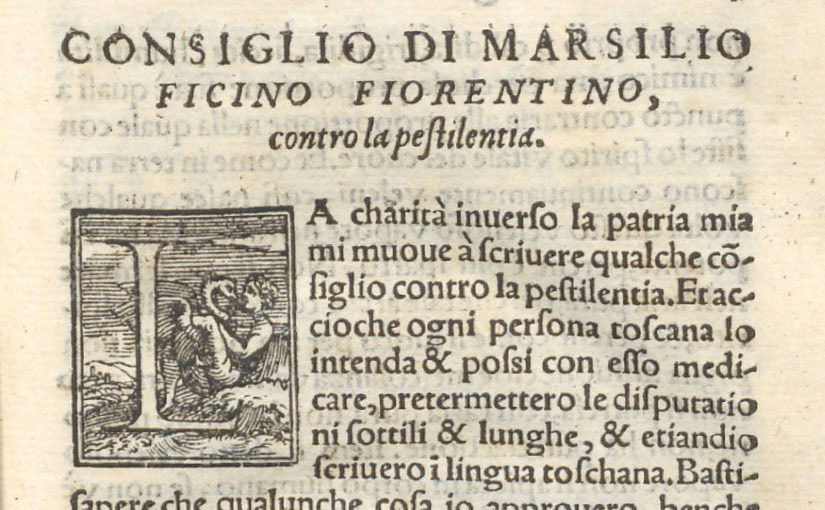 by Tracy Bergstrom, Curator of Italian Studies and Dante Collection

Following the last of these devastating outbreaks, the philosopher and physician Marsilio Ficino composed the treatise Consiglio contro la pestilentia (alternatively, Consiglio contro la pestilenza, or Advice against the Plague), a text that would remain influential for nearly three centuries. Intended to be of practical use, the treatise was initially published in Italian in 1481, and subsequently published in Latin in 1518. Rare Books & Special Collections owns a copy printed in 1556 by the heirs of Lucantonio Giunti, part of the famous Giunti (or Giunta) family of printers. This 1556 reprint attests to the longstanding popularity and continued relevance of the vernacular text. Consiglio contro la pestilentia opens with initial chapters concerning the origins of the disease and recognizing its signs, with the remaining text then devoted to preventative measures and cures. Some portions of the treatise, including the advice to avoid contaminated spaces and seek out fresh air, are still relevant to us today. Other recommendations, such as the guidance to consume crushed emeralds as apotropaic medicine (or, if unaffordable, horseradish), we might best avoid. Also mentioned is the idea that the plague wanes within forty days, or quaranta giorni, the etymological root of the English word quarantine. A complete copy of this text from the same edition as that owned by Notre Dame has been digitized by the Biblioteca Nazionale Centrale di Roma and is available online via Google Books. This particular edition is a reprint of that published in Florence in 1522, to which are appended tavole or indexes by topic; an espositione d’alcuni vocaboli toschani, or explanation of Tuscan vocabulary as found in the text; and a brief section titled Segreto & rimedio contro la peste, or Secrets and Remedies against the Plague. It also includes the treatise Consiglio di M. Thomaso del Garbo Fiorentino contro la pestilentia, which initially circulated in the mid to late 14th century. These additions would have helped contemporary readers understand and give context to Ficino’s text.