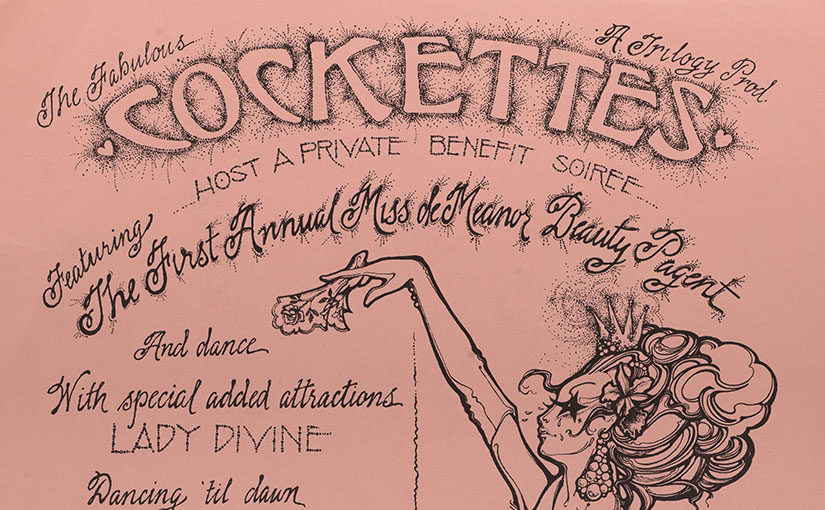 This small poster (11 ½” x 18”) advertises “The First Annual Miss de Meanor Beauty Contest” by the Cockettes, an avant-garde, hippie theater group that became known for experimental, free spirited performances of cross-dressing and musical theater. The ensemble formed in 1969 with men and women from the Kaliflower commune in San Francisco. They first gained attention by performing parodies of musical theater songs (in full costume and makeup) at the city’s Palace Theater before a regular Saturday night underground film showcase, the Nocturnal Dream Show. The Cockettes created shows titled, “Gone with the Showboat to Oklahoma,” and “Tinsel Tarts in a Hot Coma.”

The evening’s special feature, “Lady Divine,” refers to Divine, a drag queen and stage name of Harris Glenn Milstead. Divine had already achieved countercultural acclaim playing characters in John Waters’ films (Mondo Trasho, 1969; Pink Flamingos, 1972) before this San Francisco appearance. She joined the Cockettes at one of their Palace Theater shows (“Journey to the Center of Uranus”) and then as Miss de Meanor in this performance at the House of Good, another underground cultural venue in the city. Other characters in the show included Miss Shapen, Miss Used, and Miss Conception.

This poster is part of Rare Books and Special Collections’ Broadsides, Prints, and Posters collection.