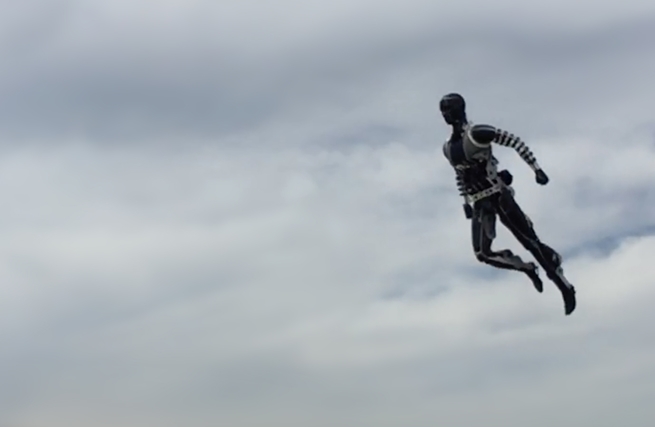 Imagine an aerial acrobat soaring fifty feet above your head and executing gravity-defying stunts during a live performance. After your initial amazement that a human could be performing acts such as these so fearlessly, you look a bit closer to realize that the performer is actually not human at all. Thanks to a groundbreaking technology recently developed by Disney Research, this could soon become a reality.

Over the past year, Disney has been working to produce a robotic stuntman that has the ability to replace its human counterpart in performing dangerous aerial acrobatics. This seamless blend of biomechanics and technology has the potential to ultimately create an immersive and unforgettable entertainment experience.

This project, known as “Stuntronics,” originated from a smaller research project known as Stickman. Stickman was a robot that consisted of a line of three metal rods connected by two flexible joints. Once cast into the air by swinging off a pendulum wire, the robot utilized sensors such as accelerometers and gyroscopes to relay to its microcontroller (or brain) information regarding its position and orientation while flying through the air. Using all of this information from the sensors, the robot then either tucked or untucked its sections to rotate more or less quickly, respectively, in order to land flat and untucked on its back. A diagram explaining the robot’s motion can be found below.

In order to scale Stickman to a more lifelike and human-sized robot, it was necessary to take a closer look at the science behind how human performers are able to execute their movements. Researchers Spiros Prassas, Young-Hoon Kwon, and William Sands explored these questions in a review focused on the biomechanics of gymnastics.

An important part of acrobatics and gymnastics is the ability to shift angular momentum (the amount a body rotates) between body parts. As a gymnast gets closer to the ground, they can either speed up or slow down their rotation by rotating their arms in order to successfully stick a landing. Performers also are able to speed up or slow down their rotation by manipulating their moment of inertia (the amount a body resists rotating more quickly or slowly) through their body configuration. For example, if the performer needs to speed up their rotation, they could reduce their moment of inertia by tucking into a ball, whereas if they wanted to slow down, they could untuck their body into a full layout.

The Stuntronics robot utilizes these concepts by continually reading the feedback from all of its attached sensors and lasers to tell the entire body which configuration it should be in at any given time. After being launched in an arc from a swinging wire, it is capable of controlling its pose in order to either speed down or speed up its rotation, and thus land perfectly each time (see video below).

This advanced technology could be pushed to the limit to ultimately produce more engaging and immersive entertainment by carrying out stunts that would simply be too dangerous for human performers to attempt. In a world where robots are constantly being implemented to take the place of humans in performing dangerous, dirty, and tedious work, Stuntronics could serve as a foundation for generations of robots, both stuntmen and non-stuntmen, to come.

For further reading, check out these articles from TechCrunch and Popular Science.