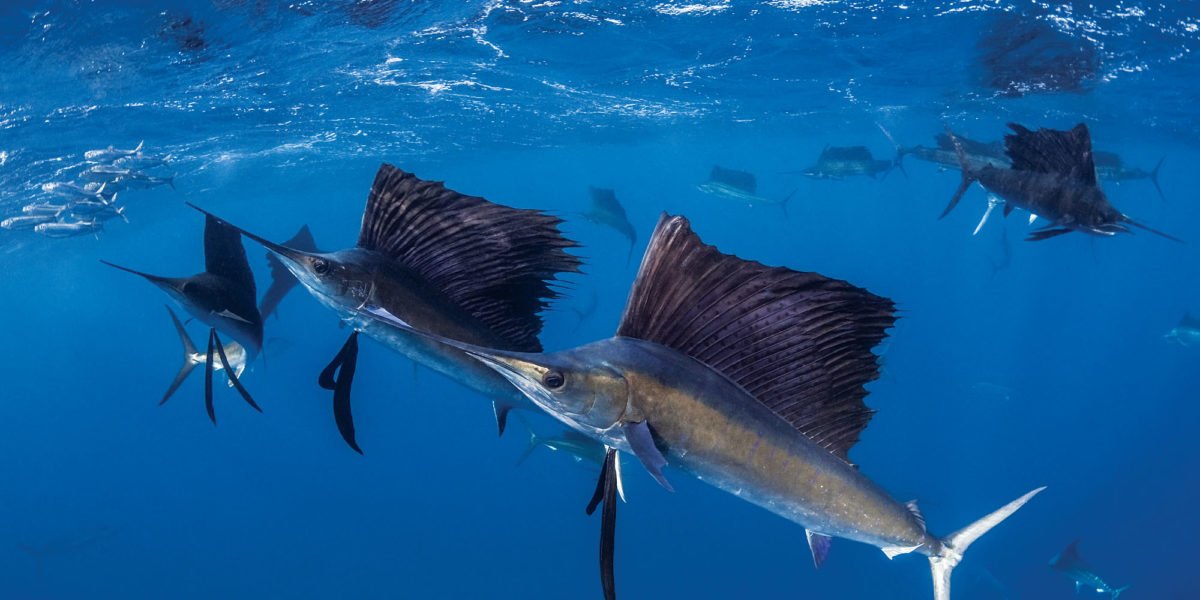 Sailfish top speeds have been recorded to be up to 30 m/s, which roughly translates to 67 miles per hour. When researchers examined the sailfish swimming out in the ocean, they discovered that they have the unique ability to retract and deploy their sail and other fins. Furthermore, they saw that when swimming at top speeds, swordfish retract their sail, and when the fish are hunting prey, they deploy it. How does retracting the sail help them swim fast, and how does deploying the sail help them hunt?

When it comes to swimming fast, the answer may have to do with drag. Due to their hydrodynamic characteristics, sailfish have a very low drag coefficient, which is the quantity used to describe the resistance of an object moving through fluid. Sailfish have a drag coefficient of 0.0075, which is similar to smaller fish such as pike, dogfish, and small trout. Additionally, due to their size, sailfish are able a generate much more force with each swimming motion than their smaller peers. The combination of these two factors allows them to move at such high speeds. The thing that truly sets sailfish apart, though, is this ability to retract their sail and pectoral fins. Studies show that when the sail and other fins were retracted, sailfish are able to reduce their drag by about 18%. With less drag to worry about, the fish can be more efficient in generating thrust from its swimming motion, which allows it to speed ahead of the competition. To get a sense of just how fast these fish move, watch the end of the video above, where they only get up to 40 mph!

Sailfish usually feed on smaller fish that swim in schools, like sardines. These small fish “exhibit higher performance than large fish in unsteady swimming,” which is to say making quick lateral movements. So, if a sardine senses a sailfish coming at it at full speed, it will likely have no problems avoiding it. With the sail dorsal-fin raised, the increase in drag slows the fish down dramatically and steadies its swimming path.

In the figure below, sub-figures C and D show how much the tail oscillates (in grey) and the direction in which the fish is moving (in black) when the sail is retracted and deployed, respectively. Zero on the Y-axis represents the tail being directly in line with the rest of the body and the fish is moving straight forward. While the sail is up, the tail moves far less aggressively and the fish more consistently moves in a straight line.

This allows the sailfish to become more controlled in its movements and help pursue a sardine performing evasive maneuvers. When it gets within striking distance, the sail helps counterbalance the fish’s swift lunge at its prey, which provides much-needed accuracy. Biologists have also theorized that the large size of the sail helps herd the school closer together, but no official research has been done on this.

The sailfish’s ability to retract and deploy its sail dorsal-fin gives it unique advantages in both long-distance swimming and hunting. Minimizing drag is one of the most important concepts for travel through any fluid (air or water), so understanding how the sailfish is able to reduce drag could provide a new perspective on things. The sail’s ability to provide stability at lower speeds has potential use in any sort of water travel, whether it be with cargo ships (like the Evergreen in the Suez), boats, or submarines.

If you are interested in another unique feature of the Sailfish, its bill has been a popular topic as of late, especially with its feeding habits. The bill is often used like a sword, either spearing or stunning prey, and also has been thought to have helpful drag-reducing qualities. Click here for more information.