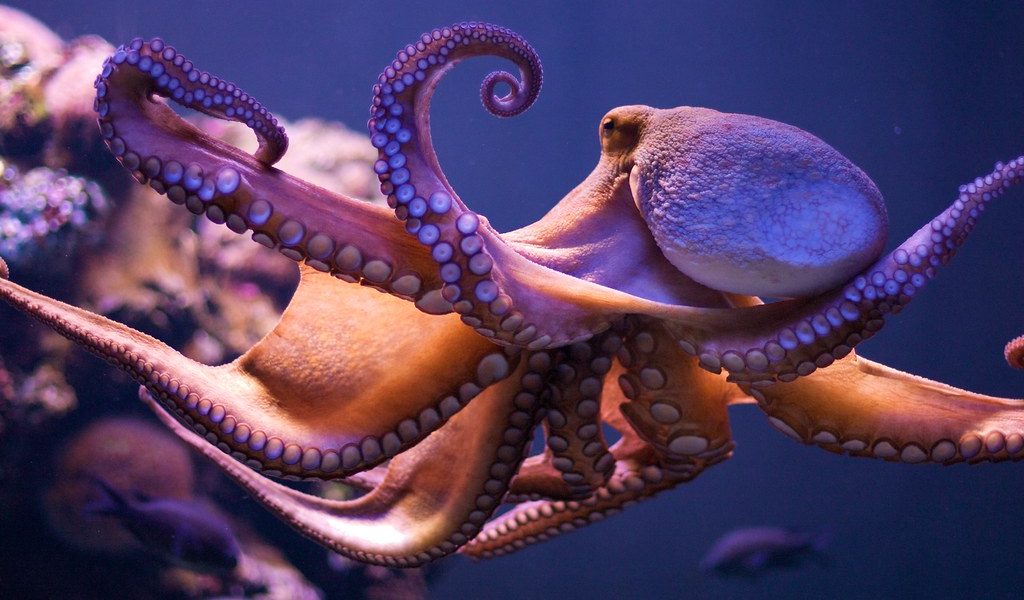 Picture this: Earth has made its first contact with an extraterrestrial species, and, as to be expected, their anatomy and nervous system are entirely different from our own. Rather than having a single brain where all sensory information and motor controls are processed, they have nine brains. Rather than having a rigid skeleton, they have compact arrays of muscle tissue that stiffen and soften when they move, and their many limbs have an infinite number of degrees of freedom. Oh, and they can only breath underwater, too.

What was just described isn’t an alien at all, but actually the complex anatomy belonging to a common octopus, otherwise known as Octopus Vulgaris, and there is a lot we can learn from it. So how does an octopus fully control all eight of its flexible limbs? The answer lies in its partially de-centralized nervous system. When most people think of a nervous system, they think of a single brain sending out messages to move our arms and legs, then gathering information back to process everything we touch, see or hear. For an octopus, though, this process is much more complicated.

Each arm of an octopus is able to control itself semi-independently from the central brain. An octopus has about 500 million neurons in its body, two-thirds of which are distributed amongst its limbs. This means that there are about 40 million neurons in each tentacle. That’s more than two times the number of neurons the average frog has in its entire body! An experiment conducted by German Sumbre et al. showed that even when a disconnected arm was electrically stimulated, it would still move in the same basic patterns of a tentacle being controlled naturally by an octopus. The arm even adapted its movement patterns the same way a still-connected tentacle did when the arm’s environment and initial posture were changed.

So how does this partially de-centralized nervous system work? The octopus does, in fact, have a central brain located between its eyes containing about 180 million neurons. This is the part of the nervous system that determines what the octopus wants or needs, such as if it needs to search for food. These are sent as messages through groupings of neurons. Commands like “search for food” are then received by each of the tentacles, who all have their own smaller, independent brains. With these commands in mind, each tentacle gathers its own sensory and position data, processes it, and then issues its own commands on how to move by stiffening or relaxing different parts of the arm, all without consulting the central brain upstairs. As the tentacle moves, it keeps collecting and processing sensory information, and any relevant information, such as the location of food, gets sent back to the central brain to make larger decisions.

There is still a lot left unknown about how exactly an octopus’ nervous system functions. However, new and upcoming fields such as soft robotics and artificial intelligence are starting to look towards the opportunity for innovation that octopuses present. Learn more about how the anatomy of an octopus is being applied to science and technology here and here!