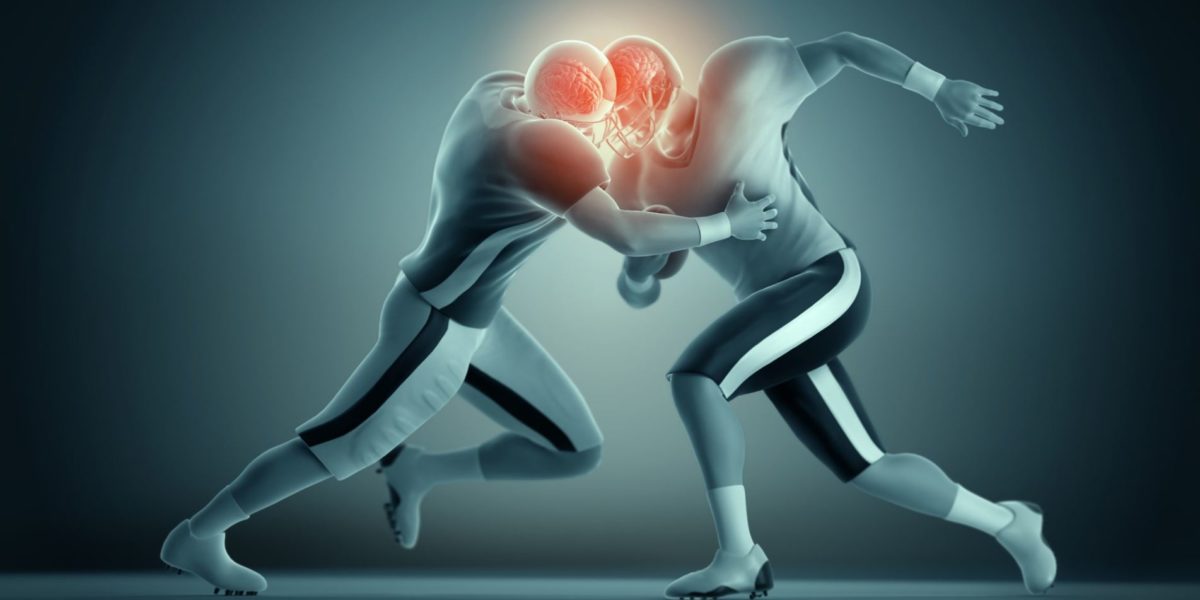 Anyone that has ever had the misfortune of banging their head know how painful it can be, but does everyone understand just how dangerous it can be? Concussions occur when the brain hits the interior walls of the skull, either due to a direct blow or a sudden start or stop. These brain injuries most often result in confusion, headaches, and loss of memory but more severe injuries can cause vomiting, blurry vision, and loss of consciousness. In rare instances, they can even cause a brain bleed and result in death. Repeated concussions can lead to neurocognitive and neuropsychiatric changes later in life as well as increase a person’s risk of developing neurodegenerative diseases like Alzheimer’s.

So, who is at risk for concussions?

Athletes sustain 1.6-3.8 million concussions every year in the US. They are most common in contact sports such as soccer and hockey, but the largest contributor is American football. Players are constantly hitting or tackling each other in football, and each impact risks serious injury for both individuals.

How does it happen?

It all comes down to conservation of energy and momentum. Newton’s second law states that an object in motion tends to stay in motion while an object at rest tends to stay at rest, unless acted on by an outside force. When player 1 starts to run, he has a set energy and momentum based on his velocity (speed). Once he hits player 2, he either slows down, stops, or bounces off in the opposite direction. However, the initial energy and momentum that he had doesn’t just magically disappear, it needs to be conserved so it is transferred to player 2. This means that player two will start moving in the direction that player 1 was initially running. This is how billiards is played: the energy is transferred from the pool stick to the cue ball and then to the intended solid or stripe.

However, injury occurs when player 2 or his head cannot move. This may be because he hit the ground or another player or even simply because his neck stabilized his head, but regardless, that energy still needs to go somewhere. When the head stops, the brain keeps going until it collides with the inside of the skull.

Fortunately, not every hit results in a concussion. The brain is separated from the inside of the skull by cerebrospinal fluid that can protect it from collision to a certain degree, so not every impact reaches the injury threshold. What that injury threshold is has become the focus of many scientific studies.

The search for the injury threshold is a vital one that could help in the development of more effective helmets and rule changes to the game that could keep players safe. Three factors are believed to dictate this threshold: linear acceleration, angular acceleration, and location of the impact. The linear acceleration is what causes the collision with the skull, as previously described. The rotation of the cerebrum (the bulk of the brain) about the brain stem can cause strain and shearing within the upper brainstem and midbrain, which control responsiveness and alertness (causes the confusion symptoms). Finally, certain areas of the brain are more susceptible to injury- like the frontal lobe, temporal lobes, and brain stem since they are near bony protrusions– so the location of the impact can have a major influence in the injury threshold.

While there is still no set threshold, one study was conducted in which 25 helmet impacts from National Football League (NFL) games were reconstructed and the resulting helmet kinematics measured. The study found that the heads of concussed players reached peak accelerations of 94 (+/-) 28 g (acceleration due to gravity-9.8 m/s^2) and 6432 (+/-) 1813 radians/s^2. A separate study focused on the location of concussions of football players and that resulted from specified linear accelerations, as seen in Figure 1.

While there is still much that needs to be learned about sports-related concussions and their long term effects on athletes, scientists are well on their way to understanding the biomechanics that cause them. The next step is using that knowledge to create better protective headgear and a safer game.

To learn more, check out these links!