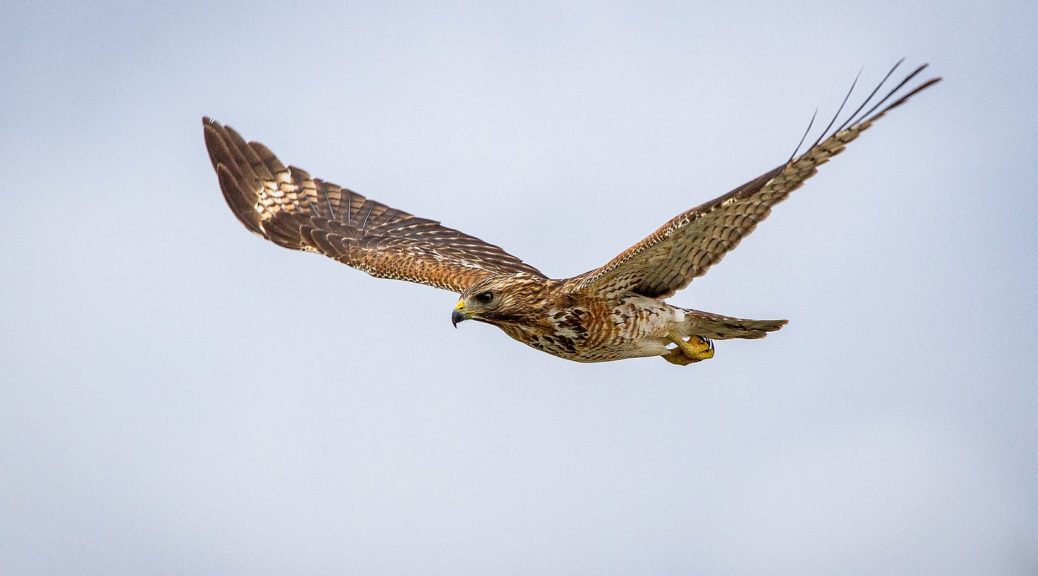 Obviously, the exact aerodynamics and physical characteristics of birds will vary from species to species, but there are still underlying similarities that enable birds to fly. A bird’s wing consists of a shoulder, elbow, and wrist joint which establish the wing’s basic shape and allow a range of motion. Covering the wing are structures called primary, secondary, and coverts, which are all groups of feathers that provide lift and stabilize flight. Feathers consist of flexible fibers attached to a center shaft, called the rachis. Overtime, the rachis will become damaged from fatigue and large instances of stress. As a result, birds will molt and regrow their feathers on a regular basis.

Generally, a bird’s body will be adapted to either gliding flight, in which the wings flap very infrequently, or active flight, in which the wings flap nearly constantly. For gliding birds, such as the ocean dwelling albatross, the wings will extend far away from the body, and prioritize both wing and feather surface area over flexibility. Additionally, these wings will have a thick leading edge, and will be much straighter. However for fast, agile birds, such as falcons, the opposite is true. Consequently, agility is sacrificed for energy efficiency. In both cases, the rachis will change shape and rigidity, becoming larger and stiffer for gliding flight and smaller and more flexible for agile flight.

One of the most unique aerodynamic characteristics of birds is that nearly all of their lift and thrust is exclusively generated by their wings, as opposed to aircraft that implement both wings and engines. This provides, among other things, near instantaneous control of both flight direction and speed. In other words, this gives birds an advantage when hunting, escaping from predators, and maneuvering through a landscape.

To aid in the generation of thrust and lift during flight, birds will change their wing shape through a process called active morphing. During flight, the wing will be bent inwards and twisted up during the upstroke, and extended and straightened during the downstroke. As a result, this minimizes drag while maximizing thrust and, consequently, energy efficiency. This can aid in anything from traveling farther distances to hunting prey.

Initially, these principles may seem difficult to realistically utilize in aircraft. After all, we are limited by the materials available and the size that aircraft must reach. However, small steps could be taken to improve the energy efficiency and responsiveness of aircraft. For example, wing shape, material flexibility, surface finish, and moving joints could all be explored. In fact, research at MIT is currently being conducted on flexible wings made of scale-like modular structures. If experiments like this are successful, it could show that aircraft designs inspired by nature may be the future of the world of aeronautics.