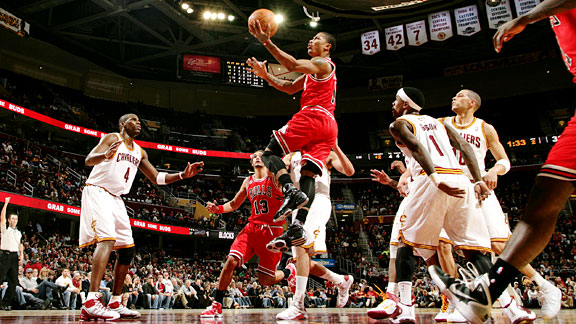 How does someone go from being the youngest NBA MVP one year to barely making headlines the next? Ask Derrick Rose. After being named the youngest MVP in the NBA, Derrick Rose tears his ACL the next year and then tears his right meniscus twice in the span of three years. Knee injuries have not been kind to Derick Rose, but how does one tear their meniscus and how does it get repaired?

The meniscus is shown in Figure 1.

According to Sports Health, the meniscus is a type of cartilage that provides cushioning between the bones in the knee. The meniscus main role is to absorb shock and the impact on the leg and knee when it is in motion. It allows for stability and smooth motion between the joints.

In a game of basketball, one of the biggest sports in the United States, there is plenty of running, jumping to shoot the ball into the basket, jumping up to catch a rebound, and doing sharp cuts during the game to shake off a defender. All these movements cause high loading on the knee, and if there is an over-rotation on the knee during these movements, then it can cause a tear in the meniscus. The video below shows when Derrick Rose tore his meniscus.

In the video, it shows Derrick Rose doing a relatively easy movement, he plants his foot in order to change direction to chase after the ball. It is a non-contact movement, but due to an awkward landing on his foot, he gets injured and misses games for the rest of the season.

When the meniscus is torn, there are two options in terms of healing the tear. The options are getting the meniscus removed or getting it repaired. Both options have their own recovery time. If you get the meniscus removed, then the recovery time would be from four to six weeks. However, there are setbacks to getting the meniscus removed such as leading to early arthritis. If the meniscus is repaired, then the timetable to return to play is around six months. According to USA Today , he chose to get the meniscus repaired in order to not have future complications around his knee, which is why he had to sit out for the rest of the season. Going this route also gave Derrick Rose the chance to return to his playing form before injury. According to Stein, 96.2% of athletes that undergo meniscal repair go to pre-injury level of activity after the repair, which is good news for Derick Rose.

However, Derrick Rose tore his meniscus again the following season in 2015. He would then have surgery to remove the damaged part of the meniscus and would return in a couple of weeks. This would then be his third surgery to repair his knee, and his surgeries must have an effect on his playing performance. After these surgeries, the world waits to see if Derrick Rose can reach MVP status again during his career. It would be tragic to see that these knee injuries would ruin someone’s career.

Meniscal Injuries in the NBA

Injuries in the WNBA