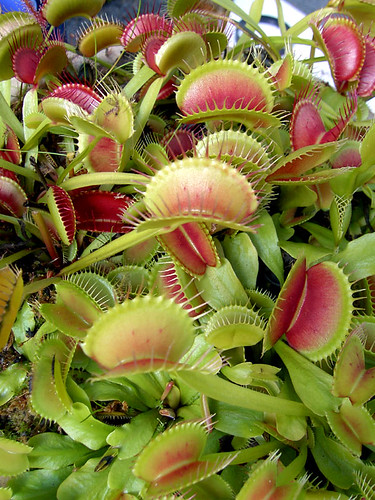 Dionea Muscipula, also known as the Venus Fly Trap, is universally considered an interesting and eye-catching plant. Most people are fascinated by its ability to snap its lobes closed around prey, allowing it to then chemically dissolve the trapped animal and subsequently absorb nutrients from its body. What most people fail to realize is the incredible amount of biomechanics required for this plant to survive. Not only is this information useful and interesting to know, but it is crucial for scientists to better understand how plants can respond to physical stimuli.

The Venus Fly Trap is native to southeastern United States and is popular due to its unique method of absorbing nutrients. Unlike most plants, they do not obtain most of their nutrients from the soil, instead they absorb them from dissolved insects that they trap within their lobes. Despite the name Venus Fly Trap, their primary prey are spiders, ants, and other insects, especially those that do not fly. These animals are attracted to the plant via the scent of its nectar that is used to lure them to their fate. A detailed process of how they do this can be seen below.

Process of the Trap Closure

Another interesting aspect of the closure of a Venus Fly trap that most people may not expect is that the hydration of the plant has a massive effect on its closure. Turgid plants, which means they are fully hydrated and cannot absorb any more water, are able to close much quicker than dehydrated plants. It was even found that if a Venus Fly Trap becomes dehydrated in its lifetime before being rehydrated, it still shuts slower than turgid plants. Another side effect of the plants being dehydrated was that the opening angle of their lobe was 10-15 degrees wider than when they were fully hydrated. While the exact cause of this is unknown, it is speculated that as the plant becomes more dehydrated, it is more desperate to absorb nutrients and by widening the opening of the trap, there is a larger surface area for an insect to crawl across and subsequently become trapped. Below is a video of a dehydrated plant that closes much slower than the turgid one shown above.

All in all, the Venus Fly Trap is an incredibly exciting plant that takes advantage of some very unique biomechanics to carve out its niche. While there is much we know about this special plant, there is still much more to for us to discover in the near future regarding its rapid closure and overall biology.