The language of monstrosity has long been used to demonize the other, the foreigner, the alien and the immigrant.

In the Old English poem, Beowulf, the Grendelkin are quintessential outsiders—lurking in the shadows and haunting the wilderness as scuccan ond scinnan “demons and monsters” (939). But the Grendelkin are also characterized with a measure of sympathy. Grendel is depicted throughout as a human suffering in exile, portrayed as rinc “man” (720), who is dreamum bedæled “bereft of joys” (721, 1275), and as feasceaft guma “miserable man” (973), forced to wræclastas tredan “tread the paths of exile” (1352).

Early in the poem, the narrator introduces Grendel as:

“The grim spirit was called Grendel, the famous mark-stepper, he who held the marshes, fens and strongholds, the unlucky man guarded the realm of monsterkind a while.”

The narrator names Grendel a mearcstapa, a compound generally understood to mean “border-walker,” in reference to his wandering in the wild. And later in the poem, Hroðgar characterizes both Grendel and his mother in virtually identical terms:

“I have heard that the land-dwellers, my people, and hall-counselors say that they saw two such foreign-spirits, great mark-steppers holding the marshes.”

In this passage, the Danish king describes his monstrous neighbors as mearcstapan “mark-steppers” and as ellorgæstas “foreign-spirits” (a compound that highlights their status as other). Although Manish Sharma makes a compelling argument for “marked wanderer” as a possible translation of mearcstapa—referring to the mark of Cain and corresponding to descriptions of the Grendelkin as Cain’s progeny, in Caines cynne “in Cain’s kin” (107)—nevertheless, “border-walkers” remains the preferred interpretation of the Old English compound.

However, a third available translation of mearcstapa is “border-crosser” and this interpretation of the Old English compound focuses on the Grendelkin’s liminality and sorrowful journeying between the Danish kingdom and realm of monsters. Interpreting mearcstapan as “border-crossers” aligns the monstrous Grendelkin with immigrants, migrants, exiles and foreigners—the very groups actively demonized and discriminated against by the current administration, as demonstrated by executive orders and enforcement practices, including (but by no means limited to) President Trump’s Muslim Travel Ban and Zero Tolerance Policy.

In Allison Meier’s recent blog “How Medieval Artists Used Monsters as Propaganda,” discussing the Morgan Library and Museum in New York’s exhibit, Medieval Monsters: Terrors, Aliens, Wonders, she draws modern-medieval parallels regarding the monstrous characterization of marginalized groups. She notes how Trump’s rhetorical strategies often rely on this sort of stereotyping and fear-mongering, as demonstrated by statements during his announcement of his presidential candidacy in 2015 that those crossing the US-Mexican border were “people that have lots of problems, and they’re bringing those problems with us. They’re bringing drugs. They’re bringing crime. They’re rapists.”

Meier’s point that Trump’s rhetoric on immigration appropriates the language of monstrosity in order to demonize undocumented immigrants and asylum-seeking refugees resonates with the sentiments of the exhibit’s curators, Asa Simon Mittman and Sherry Lindquist, who argue in their accompanying catalogue, “Monstrous imagery was often associated with members of socially disadvantaged groups in order to suggest that they were less than human; such a strategy rationalized repression and could even be used to instigate violence.” I can only add my voice in harmony with those calling for resistance against recent nationalistic and xenophobic (especially anti-immigrant and anti-Muslim) rhetoric, which targets and dehumanizes specific groups of marginalized peoples by characterizing them as monstrous and other.

The effects of this normalized rhetoric are manifesting and have paved the way for ongoing atrocities and crimes against humanity perpetrated by the United States government. The current administration’s dehumanizing policies on immigration—including separating families, concentrating people in detention centers and holding children in cages—will undoubtedly have lasting social ramifications and could result in future blowback and retaliatory violence.

Cyclical violence is a frequent occurrence in the martial world of Beowulf. Yet, Grendel’s mother, who comes to avenge the death of her son, surprises Beowulf when she appears in the form of blowback resulting from Grendel’s defeat at the hands of the Geatish champion. Hroðgar, however, is not at all shocked by the monster’s reciprocal violence, and even goes so far as to implicate Beowulf in perpetuating the feud between the Danes and Grendelkin. The Danish king explains that:

“She (Grendel’s mother) then avenged the feud because you (Beowulf) killed Grendel yesternight, through violent nature, with hard grips, since he too long wasted and destroyed my people. He fell at war, guilty of life, and now another mighty criminal-slayer comes, she wished to avenge her kinsman, and has carried on the feud from afar.”

In this passage, Hroðgar seems to sympathize with Grendel’s mother’s plight, twice described as a sorhful sið “sorrowful journey” (1278, 2119), and frames her vengeful response to the death of her son in terms of his own feuding culture and revenge obligations. Nevertheless, the Danish king appears able to empathize with his enemy—a mother who has lost her child—perhaps because her situation is all too familiar to the human experience, then as now.

Orchard, Andy. Pride and Prodigies: Studies in the Monsters of the Beowulf-Manuscript.  Toronto, ON: University of Toronto Press, 2003. 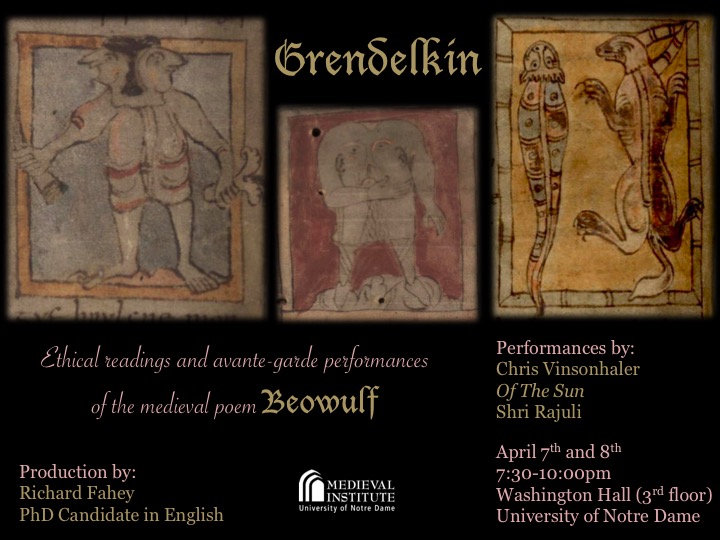 One year ago, Grendelkin made its debut at the University of Notre Dame’s Washington Hall (April 7th and 8th 2017). Today, it is my pleasure to share video documentation of the project.

Grendelkin was directed by Richard Fahey, produced by Tom Fahey and sponsored by the Medieval Institute. Contributors include scholar and storyteller Chris Vinsonhaler, the Boston-based musical group (((::OFTHESUN:))) and performing artists Shri Rajuli and Wisty Andres.

A previous post on Grendelkin, predating the event, describes the project’s program in detail and provides scholar and artist biographies for anyone interested in additional information.

We hope that you enjoy the video of Grendelkin!

“Beowulf: A Poem For Our Time”
Storytelling and harp accompaniment by Chris Vinsonhaler

Grendelkin wants to direct special thanks to Washington Hall for providing a venue, to Chris Abram, John Van Engen, Thomas Burman, Megan Hall, Christopher Scheirer, Sara Maurer, Peter Holland and the English Graduate School for supporting the project, and especially the Medieval Institute and the University of Notre Dame for sponsoring and hosting the event.