And always the lord of the land is away at his sport,
Hunting the barren hinds in the woods and heath;
He killed there such a quantity by the time the sun fell,
Of does and of other deer, it was wonderful to assess.
Then spiritedly the people assembled at last,
And quickly made a heap of game from the killed deer.
The nobles went there with many men,
Gathered the fattest that there were,
And had them gracefully cut open in the prescribed manner.
Some who were there examined them at the ‘assay;’
They found two fingers’ breadth of flesh on the poorest of them all.
Then they slit the hollow at the base of the throat,
Took hold of the gullet, scraped it with a sharp knife and tied up the flesh.
Then they slit along the four legs, and stripped off the hide;
They opened up the belly, drew the bowels,
Carefully to avoid undoing the ligature of the knot.
They seized the throat and properly separated
The gullet from the wind-pipe and tossed out the guts.
Then they cut out the shoulder-joints with their sharp knives,
Drawing them through a small hole so as to keep the sides intact.
Then they cut open the breast and divided it in two.

Part III of Sir Gawain and The Green Knight details scenes between Gawain and the Lady of Lord Bertilak alongside scenes of Lord Bertilak and his men hunting in the woods. The Pearl-Poet juxtaposes the slower bedroom scenes, which focus on conversation over action, with the violent, aggressive hunting carried out by the Lord and his men. I chose to focus on the deer hunting passage to examine the intimacy it possesses, question why the poet chose to speak of the hunt with such candor and detail, and determine why his explicit explanations are powerful and necessary in the poem. In lines 1319 to 1339, the lord engages in the hunt itself, returns with several other individuals to the castle, and begins to dismember the multiple carcasses they accumulated on their journey. The blunt, vivid manner in which the poet discusses the deer is unsettling, yet intriguing for readers. Vocabulary such as “slit,” “stripped,” and “seized” is dramatic and gory. The poet does not attempt to soften his speech because it is not his mission to coddle or to comfort readers. These and other uses of this visceral language force readers to visualize the carnage and does not give them an opportunity to look away. 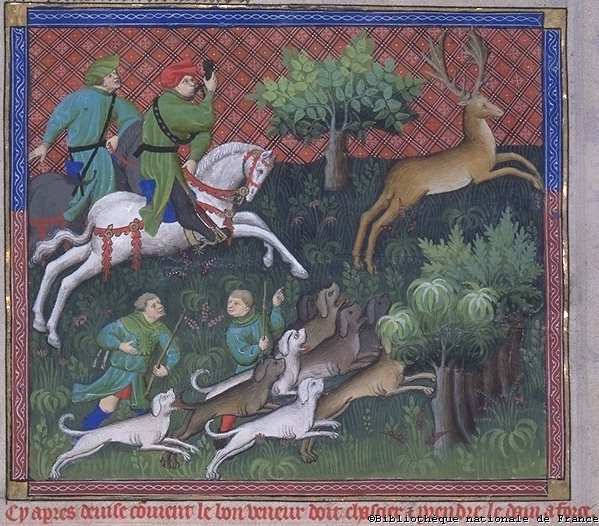 The power and pure, physical strength of the noblemen is evident throughout this passage, as they swiftly kill hundreds of deer, animals that often represent innocence. This sport was not merely a simple pastime, but was a source of pride and prestige for these men. According to the book, hunting skills were praised because individuals viewed them as aristocratic accomplishments. These skills displayed a man’s ability to master that which was below him and to do so with ease. Here, the male dominates the doe. Back in the bedroom, it is the woman who acts as the female aggressor and assumes power over Gawain, the male. Much of the poem discusses who has the power or opportunity to act and how they choose to wield that power. Here is no exception. The stanza’s repetitive structure emphasizes that it is the men that possess control over the animal, as nearly every line begins with “they” and proceeds to detail how they cut or sliced the deer lying before them. The process may seem monotonous, but each individual cut and chop is just as significant and horrific as the first.

In addition to examining my personal translation, I also read Marie Borroff’s translation of the text. While some of her version was true to the original text, parts were problematic, as they eliminated much of the brutality and streamlined the harsher vocabulary to produce a more pleasing end result. From the beginning, her translation fails to include the same information present in the poet’s text. While my translation reads, “And always the lord of the land is away at his sport,” hers reads, “And the lord of the land rides late and long.” Though Borroff succeeds in maintaining the alliteration in her version, she does not indicate that the lord is engaging in his sport, nor does she specify the normalcy of this action. My translation highlights the fact that this behavior is routine for the lord, while Borroff’s gives the lord little ownership of the game. His passion for and time given to this game is significant and explains why the poet chooses to explore the event in detail rather than sum up all that occurs in a few lines. This hunt has meant and continues to mean something to the lord, so therefore it should mean something to us reading, and we should have the opportunity to fully experience his journey alongside him. Simplifying the line and maintaining the original structure should not be done at the expense of the poem’s actual content.

In line 1329, a slight vocabulary change is not only inaccurate in tone, but it is also not faithful to the meaning found in the medieval text. Rather than referring to the deer as the “poorest of them all,” Borroff states that the men began to cut open the “leanest.” If an animal is lean, then it is healthy. Poor does not equal healthy. The “poorest of them all” could indicate that the animal looked sickly, small, or it may address the animal as a victim. The leanest may instead look visually appealing to the hunters. This animal is the poorest, as it is the primary animal to suffer under the knives of the men. Referring to the animal as poor acknowledges its existence, gives it agency, and offers sympathy. Calling it lean merely remarks on its size and stature. These two words are not synonymous, so the intent of the poet is not evident here in Borroff’s work.

A discrepancy in line 1332 is also worth noting. While my translation reads that the number of does and deer “was wonderful to assess,” Borroff states that the amount of animals “would dizzy one’s wits.” The first indicates that the sheer amount of deer that the men collected should inspire awe. It remarks on those given the opportunity and, ultimately, the gift of witnessing this in person. Borroff’s, however, comments on the magnitude of the number, but not on the majestic or inspiring qualities it possesses. Just as Borroff failed to capture the lord’s relationship with the sport, she does not portray the same feeling of merriment my translation does. While this detail may not have severe consequences for the poet’s intent or meaning of the section as a whole, it is important to describe the scene to the best of one’s ability and to attest to the positive energy that clearly filled the room, no matter how violent the acts they soon commit.

Borroff’s oversimplification occurs again several lines later when the men return to the castle to take apart the deer carcasses. Line 1330 in my translation reads: “Then they slit the hollow at the base of the throat,” while Borroff’s line is, “Then they split the slot open and searched out the paunch.” Again, Borroff includes alliteration in the line, but differing from the other line, she decided to keep a Middle English term in her translation rather than adapt the text for a Modern English reader. She keeps “slot” rather than changing to “base at the hollow of the throat.” The term “slot” is vague and offers little description of where the men are now cutting into the deer. The “base at the hollow of the throat” is more explicit and emphasizes the vulnerability of this animal. It conveys the intimacy of this moment between man and beast. The phrase “split the slot” over “slit the hollow” sounds especially safe, as though she is hoping to shield readers from the piercing and stabbing, even though these actions are natural and what must happen to complete the hunting process. Borroff also speaks of an incorrect body part in this particular line by stating they look at the “paunch”, or abdomen, rather than the “gullet,” meaning esophagus. It is confusing why she chose to skip to another body part altogether when the poet purposefully dedicates a generous amount of time to the throat as it is one of the weakest and most exposed parts of any creature. The dominance of the males over the susceptible deer should be blatant and overdrawn, not watered down by a translation that sometimes chooses to merely include the main idea without delving into excessive detail.

Line 1323 contains a seemingly minor vocabulary change, but one that interestingly represents Borroff’s translation as a whole. My translation reads: “Then spiritedly the people assembled at last,” while hers reads, “then they trooped in together in triumph at last.” Borroff retains the alliteration with small articles in between the “t” words, and the line actually resembles the sound it describes: trotting horses. While this is fine work by Borroff, she changes “spiritedly” to “in triumph” in her translation, which I find troublesome because “triumph” emphasizes a definite win over someone or something lesser. While the hunters did triumph over the deer, the poet does not emphasize this point until later when he begins to detail the cutting and slicing of the deer. Before the first deer is selected, the men are spirited and seem celebratory, but their great triumph is not made entirely obvious. Throughout Borroff’s translation, she chooses to compromise some of the vocabulary in order to keep the lines alliterative; however, the hunters’ success should be made evident through the total control they soon demonstrate over the animals, not by the manner in which they return to the castle.

It is a testament to the poet’s superior talent and skill that Sir Gawain and The Green Knight is still read and translated by students and professionals alike. While overall Marie Borroff offers a detailed, authentic translation of the poet’s text, she at times chooses to connect with modern English readers rather than capturing the poem’s true essence that the author so greatly executed. She sometimes chose to focus on rhythm rather than gauging the appropriate tone and opted to soften her language to erase some of the overwhelming violence prevalent in the text. However, modern readers are not or should not be as sensitive as she believes them to be. Rather, she should highlight the terror in the poem because no one can totally escape from or should be ignorant to the unpleasant aspects of life, whether real or imaginary.