Til the knight came himself, urging on his horse,
Saw him wait at bay, beside his men.
He dismounts beautifully, leaves his horse,
Draws out a bright sword and strides forth powerfully.
Goes swiftly through the ford where the fierce one waits.
The wild animal was aware of the man with the weapon in hand,
The hair raised up on end; he snorted so fiercely
That the many feared for the knight, lest the worst befall him.
The boar charges straight at the man,
That the man and the boar were both in a heap
In the strongest current of the water. The other had the worst,
For the man marks him well, as they first met,
Firmly sets the blade exactly in the hollow at the base of the throat,
Struck him up to the hilt, that the heart breaks apart
And snarling he yielded to him and was carried downstream
Quite quickly.
A hundred hounds seized him,
That fiercely biting him;
The men brought him to the bank
And the dogs condemn him to death. 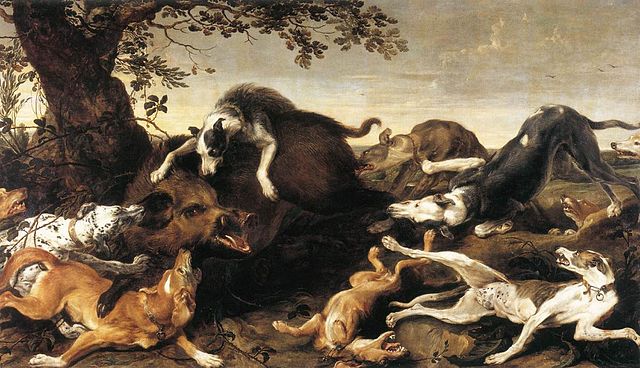 This section of Sir Gawain and the Green Knight is from the second hunting scene. These action packed scenes of the men hunting various animals are interjected by scenes of Bertilak’s wife trying to seduce Sir Gawain in his bed each morning. Here we have interesting interplay between two different kinds of aggressors. It presents two manifestations of the passions of raw human nature, the sexual and the violent, while showing their overlap. On the one hand, we have the male aggressors hunting deer and boars for sport, and then we have the female sexual aggressor who is performing her husband’s wishes as she tries to seduce Gawain. The fast-paced violent action of the hunting scenes makes the scenes with Bertilak’s wife all the more intense and intimate. Bertilak also seems to be channeling his sexual energy and frustrations about his quest into the hunt. In the original text, through the vivid imagery and the fact that Bertilak has an audience of men who are holding their breath as he attacks the boar, the reader gets a real sense of the drama of  the scene.

Formally, there is a lot going on in this section of the poem which is true of Gawain as a whole; some elements include effective imagery, intentional alliteration, and allusions to elsewhere in the text. The most important part of this passage for me is how the Gawain-poet elicits visceral reactions through vivid sensual imagery. The reader can see the violent battle between the knight and the boar, experience the fear of both opponents, feel the anxiety rolling off the watching men, and, in the last line, the reader is repulsed and oddly satisfied by the final depiction of the dogs ending the boar. I will look into a few of these images in greater detail in comparison with Marie Borroff’s translation later in this blog post. As is the case throughout the entire poem, alliteration plays a huge part in conveying tone and meaning—and this section is no exception. One of my favorite instances of this occurs at line 1594, which reads, “Hit hym vp to þe hult. Þat þe hert schyndered.” With this forceful repetition of the “h” sound, the reader can almost hear the exhalation or gasp of the boar as Gawain strikes him. This also shows how reading the poem aloud can emphasize this effect of the words. Another interesting aspect to the Gawain-poet is that he cleverly foreshadows and references other moments in the story throughout the entire poem. In line 1593, the Gawain poet writes “Set sadly þe scharp in þe slot euen.” The careful aim and powerful movement of Bertilak in this line recalls the how Gawain beheads the Green Knight at the beginning of the poem.

Overall, in comparing my translation with Marie Borroff’s, I noticed that there are fewer words in her modernized text. In this way, she still makes the encounter seem dramatic, but it is more about the conflict of the generic “Man versus Beast,” rather than the specific knight and boar. If we directly translate the passage, we get Bertilak’s own sense of urgency and the more visceral descriptions of the boar’s death. In this way, the Gawain-poet’s text is more immediate, intense, and personal. By looking at some of the problematic passages I found in the Borroff translation, I will show how her attempt for lyrical and relatable poetic language precludes the reader from gaining a true sense of the poem.

For example, in line 1593, Borroff translates the phrase “Slips in the blade,” while I translated “Firmly sets the blade.” The effect of Borroff’s is to make it sound like Bertilak slipped the blade easily and even gently into the boar’s neck, like sticking a knife in pudding. In my translation, you see how Bertilak has to use force and precision as he makes the killing blow. It gives him greater agency and power, and seems like a more triumphant moment.

Then in line 1595, we see the aftermath of the boar’s shattered heart. Borroff translates the phrase, “he falls in his fury,” while I said “and snarling he yielded.” Borroff’s phrasing recalls the language of epic poetry, with heaven and hell imagery as he falls dramatically. In my more direct translation, the boar’s death is much more rooted in reality. You understand the feeling that the boar is unwillingly yielding to the knight’s wishes. The knight is, once again, more of an active agent inflicting powerful force on the boar, forcing the boar to give in. This boar is violently aggressive and protests vocally until the end.

Another problem for Borroff is her attempt to recreate an alliterative structure. Sometimes she does a nice job with either repeating the same consonant from the original text or choosing a sound with a similar effect, but she is not always that successful. In line 1583, the Middle English reads “He lyȜtes luflych adoun, leuez his corsour.” Instead of writing alliteratively, Borroff tries to retain the language of the Gawain poet by translating, “Lightly he leaps down, leaves his courser.” Because of this, Borroff alienates the modern reader by using an unfamiliar word for horse without even using it for her own alliterative purposes. Then, in line 1596 the Gawain-poet writes, “A hundreth houndez hym hent.” Borroff translates the line, “Hounds hasten by the score.” She has the repetition of the “h” in the two first words, but the latter half of the line completely lacks any alliteration. To her credit, Borroff keeps relatively the same number of syllables and captures the fast pace of the moment in the story. She does not, however, maintain the original effect of the alliteration. In the original, there is a gasping quality of the “h” which makes you hear the hounds pant as they sprint to the kill.

Lastly, in line 1600, Borroff  says, “And dogs pronounce him dead.” The verb choice makes it seem like the dogs ran over to the boar and listened for his failed heartbeat. It completely removes any sense of aggression and action. I, however, chose to phrase it with “and the dogs condemn him to death.” This infuses power in the dog’s instinctual action as well as a sort of dark primal form of justice to the text.

In general, the Borroff translation is softened, with language that is trying to be poetic and flow smoothly, but unfortunately it simply softens the visceral effect of the poem. As is so often the trouble with translation, we have to make choices for what we can keep from an original text. We have to pick and choose certain elements: the original meaning of the words, the formal structure, or the tone- to name a few. Unfortunately, as Billy Murray demonstrates while gallivanting around Toyko with a young Scarlett Johansson, some things are just Lost in Translation. 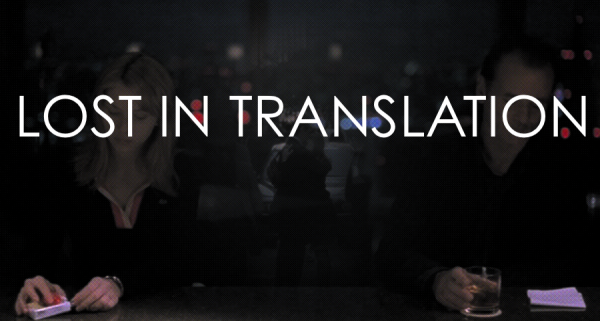