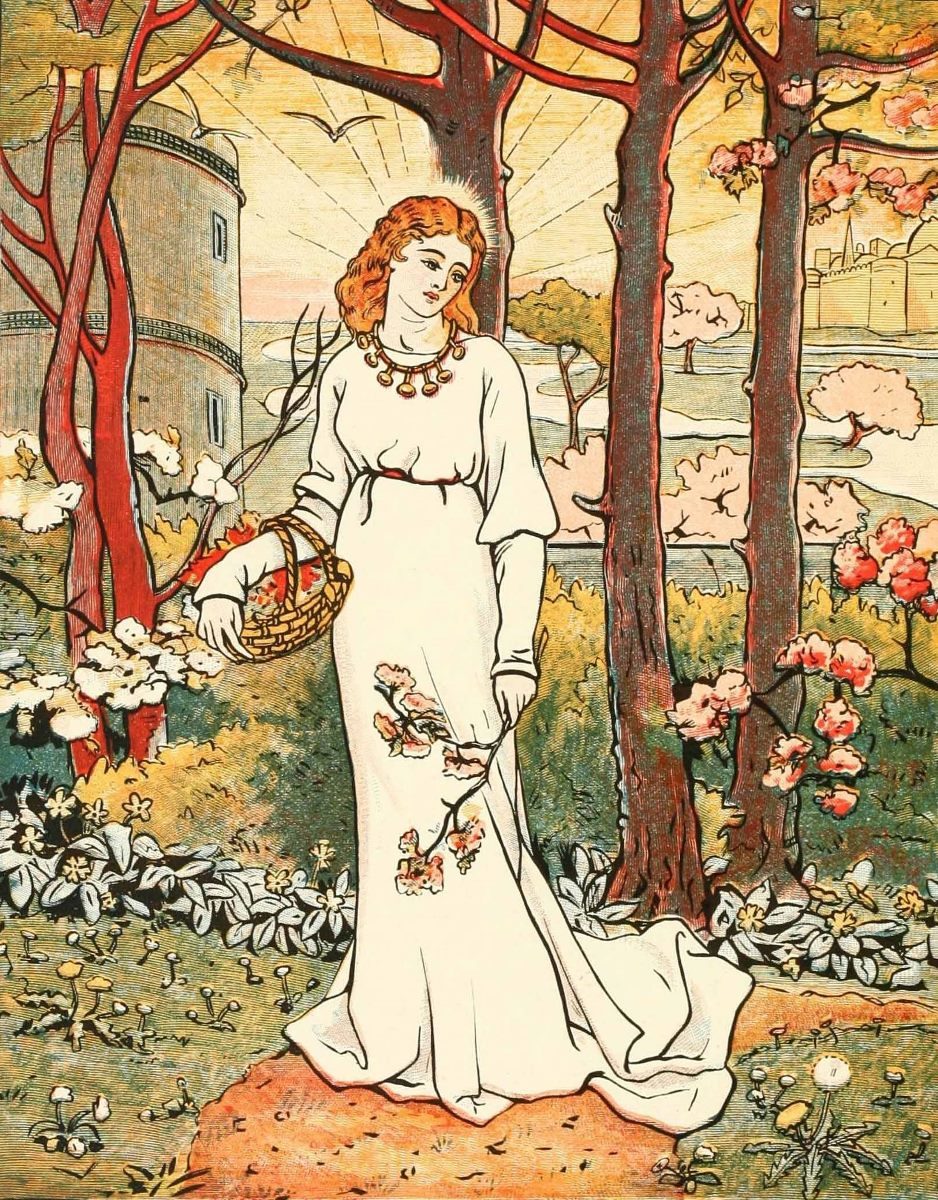 The “Knight’s Tale” is the first tale to appear in Chaucer’s Canterbury Tales, just after the General Prologue. In it, two imprisoned knights, Palamon and Arcite, vie for the affections of Emily, an Amazonian woman brought back to Athens by King Theseus as a spoil of war.  After seeing her in the garden on a May morning, Palamon and Arcite fall madly in love with Emily, and they eventually duel to the death for her hand in marriage. Emily and her modes of expression (or lack thereof) are interesting, particularly because this tale, in more ways than one, sets the tone for the rest of the Tales. Emily is primarily relegated to a realm of silence in this text; however, she expresses herself intermittently through weeping and a singular, emotional prayer. This blog post will examine Emily’s treatment and expression in the “Knight’s Tale” in order to analyze the plight of women in the Middle Ages as presented through Chaucer’s poetry. Ultimately, it will reveal the disappointingly small distance we have traveled in terms of gender parity in the decades since Chaucer was writing. Indeed, it posits that Emily is one of the early victims whose voice deserves to be read in the context of the modern justice movement, #MeToo.

Arguably, in close contest with her beauty, the most striking characteristic of Emily in this tale is her silence. Throughout this tale, the knights speak amply of her beauty, “that fairer was to sene / Than is the lylie upon his stalke grene / And fresher than the May with floures newe, / For with the rose colour stroof hire hewe,” and of their desire to wed her. However, she is stunningly quiet on this subject, with one private exception of prayer, which will be examined later (Chaucer 65; lines 1035-38). Indeed, Theseus states, “I speke as for my suster Emelye,” when he announces the prospect of a duel to Palamon and Arcite (Chaucer 76; line 1833). Emily is always in the background, being talked about, but never talked to. Her silence can be interpreted, especially for modern readers, as a symbol of women’s oppression in the Middle Ages. Although, ironically, Emily is the driver for the entire tale, it is only as a tool for the knights to manipulate and fight over in order to prove the supremacy of their masculinity and honor. She has no agency, and this is mirrored in the silencing of her voice.

Although Emily’s silence is the most symbolic indicator of her lack of agency in the text, her powerful appeal to Diana before the battle also illustrates her and other women’s powerlessness. She laments, “I / Desire to ben a mayden al my lyf. / … And noght to ben a wyf and be with / childe” (Chaucer 84; lines 2305-10). Further, she pleads with Diana, “Bihoold, goddesse of clene chastitee, / The bitter teeris that on my chekes falle! / Syn thou art mayde and kepere of us alle, / My maydenhede thou kepe and wel conserve. / And whil I lyve, a mayde I wol thee serve” (Chaucer 84; lines 2326-30). Emily’s true feelings are only revealed in the sanctity and privacy of prayer, and even when she is her most vulnerable self, her desires and needs are cast in the wind in favor of what the knights of the tale desire (and, it would seem, what the gods command). Shortly after she cries in anguish, begging Diana to spare her from marriage, Diana appears unto her and tells her that she must be wed. This interaction begs the question, to what extent does Fortune play a role in this text, and to what extent are the outcomes predetermined? Both gods and Fortune appear in this text and affect the events that unfold, introducing questions of the role of agency in the lives of mankind, and especially women in the Middle Ages. Do women have any agency, or are they doomed to live as slaves to men and their desires? Emily’s prayer is a powerful glimpse into the emotional underpinnings of marriage and agency for women during this time period.

A third and final mode of expression illustrated in this text is weeping, which Emily does periodically throughout the text. There are two categories of weeping that take place in the “Knight’s Tale”: weeping over a man or men, and weeping in prayer. At the start of the tale, upon Theseus’ return, a “compaignye of ladyes” (Chaucer 63; line 898) weeps: “swich a cry and swich a wo they make, / That in this world nys creature lyvynge / That herde swich another waymentynge” (Chaucer 63; lines 900-03). Similarly, when Arcite dies, Emily “weepe bothe eve and morwe” (Chaucer 91; line 2821). In juxtaposition with the silence that dominates the majority of this tale, the weeping that punctuates the remaining spaces paints Emily as an emotional, rather than stoic, figure. Her emotions are compartmentalized – either she is entirely silent or highly emotional. In this way, Chaucer oversimplifies Emily, and, arguably, all women, through these extremes. Perhaps the only time Emily weeps and talks, thus complicating this binary, is when she is praying to Diana. In her uncertainty, she “for the feere thus hast she cried / And weepe that it was pitee for to heere” (Chaucer 84; lines 2344-45). The weeping that is peppered throughout this text speaks, in conjunction with the overwhelming silence, to the plight of women in the Middle Ages. Their lives are almost entirely controlled by men, particularly in Emily’s case. And so, she weeps, remains silent, and passionately pleas with Diana, only to be denied both understanding and her desires. Emily’s rather binary expression of emotion indicates that women have little choice, if any, over their lives, and emphasizes the roles of Fate and Fortune in place of the agency of women.

In sum, Emily’s modes of expression – silence, weeping, and prayer – offer a glimpse of the struggle of a medieval woman; however, this tale is entirely relevant to modern women, too. Even still, over six hundred years later, women experience misogynistic attempts to control their bodies and fates. One need not look far to discover this truth – no farther than Twitter, in fact, where the hashtag #MeToo has documented thousands of instances of abuse and entitlement on the part of men seeking control over women. In popular culture, too, there are examples of men dueling over a woman everywhere – The Bachelorette, as one example, not to mention the plethora of young adult fiction that employs a similar structure. Chaucer’s depiction of women in the Middle Ages is concerning and, of course, a more literal illustration of silencing women; however, the underlying implications of male control and domination plague our society to this very day.